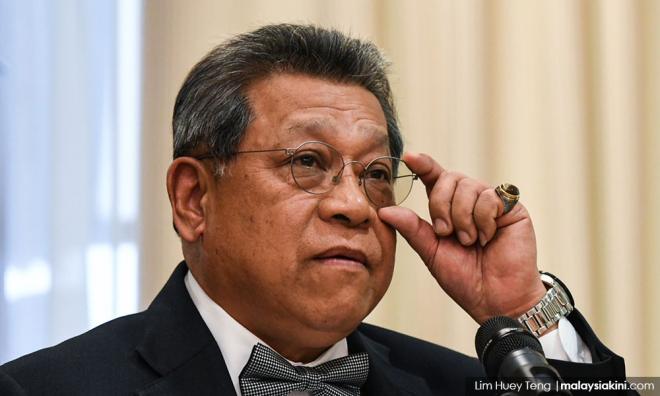 Dangerous fallacy to think Malaysia's on the road to integrity

MP SPEAKS | It is a great mistake to think that the corruption trials of former prime minister Najib Abdul Razak and a few bigwigs of the former administration signify that Malaysia is firmly on the road to becoming a top nation of integrity.

Two events over the weekend illustrate such a dangerous fallacy.

First, the denial by an exalted personality like the former Dewan Rakyat speaker Pandikar Amin Mulia that there was - or that anybody knows or cares about - the 1MBD scandal when he campaigned for PBS in the Sandakan by-election.

Pandikar had been singly responsible for the subversion of the 13th Parliament in preventing it from performing its patriotic duty to save Malaysia from being condemned by the world as a global kleptocracy.

There was neither a trace of regret nor a tinge of contrition from Pandikar for what he did as the speaker of the 13th Parliament in suppressing parliamentary debate or probe into the 1MDB scandal.

Instead, he is furtively trying to pull the wool over the eyes of the Malaysian people by denying that there is such a thing as a 1MDB scandal.

This is most irresponsible and unpatriotic, particularly at a time when the 1MDB scandal, which shamed Malaysians for nearly a decade, had been exploding all over the world with the latest news and developments – like the expected return of the first tranche of more than RM930 million misappropriated from 1MDB by the US and Singapore authorities; the sale of assets acquired by the stolen 1MDB funds like a mansion in Los Angeles; the return of a pair of diamond earrings and matching diamond ring worth nearly US$1.7 million, the sale of the billion-ringgit superyacht Equanimity or the US Department of Justice seeking Goldman Sachs Group Inc to plead guilty as part of any potential settlement over its role in the 1MDB corruption and money-laundering scandal.

Let me remind Pandikar of the National Anti-Corruption Plan 2019-2023 which states:

“It is apparent that corruption not only ruins the corruptors but it can go beyond to ruin the entire country. Malaysia has come under the spotlight for being coined a kleptocratic country, thanks to the greed of several individuals involved in mega scandals, namely 1MDB, Felda, Mara, SRC International, Sabah Water Department and Tabung Haji. These scandals have seen billions, even trillions, being syphoned off from the country. Nothing is more frustrating than to learn the state-owned investment company, 1MDB, turned its supposedly profitable investments into a global investment fiasco that lost billions of ringgit.”

At the meeting of Perak state executive councillors and civil servants, Prime Minister Dr Mahathir Mohamad spoke about “some, including civil servants, who want to oust the Pakatan Harapan government because of its efforts to combat corruption”.

Mahathir stated that there were those who said the Harapan government was not as good as the previous administration because it rejected the immoral activity.

I must thank Pandikar for finally identifying his role in the 1MDB scandal in his continuing attempt to whitewash the 1MDB scandal, belonging to the group referred to by the prime minister in Ipoh, who felt the Pakatan Harapan government should not continue, but that the country should go back to the corrupt government of the past which made Malaysia a kleptocracy.

Pandikar has turned the Sandakan by-election into a touchstone about Malaysia’s commitment to get to the bottom of the heinous 1MDB scandal and to transform Malaysia from a global kleptocracy to a leading nation in integrity or to go back to the old corrupt ways.

Former attorney-general Mohamad Apandi Ali said yesterday that concerns that ratifying the Rome Statute of the International Criminal Court would affect the Federal Constitution and Malay rulers led the Attorney-General’s Chambers during his time to reject the treaty. This was during the BN administration.

Apandi, who was appointed attorney-general in July 2015 when Abdul Gani Patail was summarily sacked from his office when it word went around that Gani was preparing to charge Najib with corruption, should explain why he aided and abetted in the 1MDB scandal.