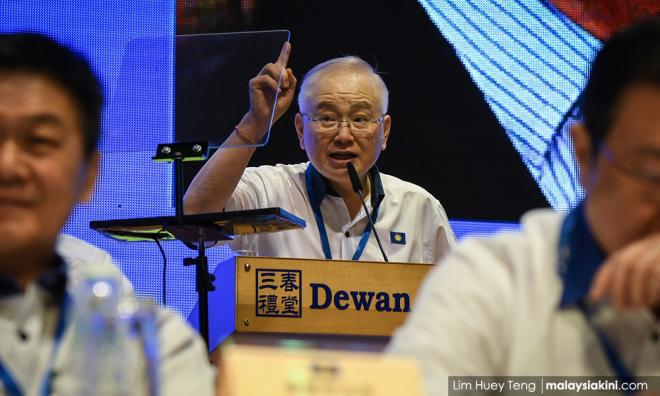 The MCA president said the impression given was that he was afraid the media would report on members' anger towards the leadership for defending former prime minister Najib Abdul Razak over the 1MDB scandal.

In a media statement issued on Dec 2, 2018, Lim said: “Is the MCA AGM today being held behind closed doors to protect Wee and the MCA leadership from attacks from MCA delegates for aiding and abetting Najib in the 1MDB scandal as well as for the new extremist and dangerous MCA politics of lies and hate?”

However, Wee, in a Facebook posting this afternoon, noted that DAP has now done the same.

"Yesterday, the debate at DAP's national conference was done behind closed doors compared to opening it to media coverage like in the past decade," he added.

DAP secretary-general Lim Guan Eng told reporters that the closed-door session was to allow for discussions on policies.

"Now that we are in government, we want to discuss issues which are important for policies, which need to be confidential," said Lim, who is the finance minister.

DAP sources told Malaysiakini that the debate was held behind closed doors to allow delegates to vent their frustrations without fear of media scrutiny.

"This would allow grassroots to let off steam. Had the session been open to the media, they would only report on the complaints instead of the actual policy solutions," said one source.

Since the last general election, certain quarters have accused DAP of acting like MCA, where its once vociferous leaders remain silent on sensitive issues.

While MCA claims DAP has lost its fangs and is under the thumb of Prime Minister Dr Mahathir Mohamad, Umno and PAS, on the other hand, allege that DAP and Kit Siang control the current administration.