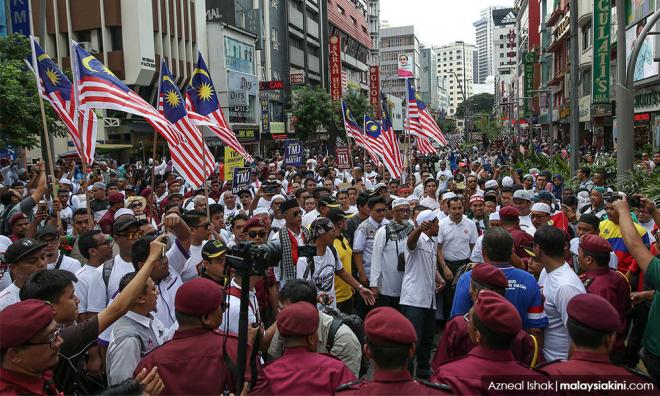 COMMENT | One year on from GE14, the biggest obstacle to Malay progress is still the Malay politician.

The inability of many Malays to reject and rise above the destructive rhetoric of old Malaysia’s bumi politician is the saddest thing in the political environment since May 9, 2018. It should be a matter of heartfelt concern to all Malaysians.

There is no denying it is the result of decades of brainwashing and scaremongering through the entire tenure of the former Malaysian government. The result is that today, a hapless Malay community is the biggest block facing Malaysia Baru as a reborn country tries to step up to a united forward march.

MCA and MIC are also guilty of duping the ethnic groups they claim to stand for, but the cumulative effect of their actions on Chinese and Indians is like nothing, compared to the lasting devastation Malays have suffered because of the politics of race and religion.

One year since rebirth, renewal and the Pakatan Harapan promise, the real enemies of Malaysia’s ethnic majority remain as Umno and PAS.

They peddle the lie that there is reason for Malays to fear for their place in this country, the religion they profess and the Malay sultanate, all of which are being threatened by Harapan and the people who voted for it. Of course, according to the duet of deceit, Malays must also be afraid of the other communities subsuming their place as bumiputeras.

The truth is, Umno and PAS lie because it is now their sole means of survival...

An open letter to Harapan government on its first anniversary
8 May 2019
Harapan needs a backbone
7 May 2019
Kit Siang refuses to let 'crown of thorns' pierce New M'sia promise
7 May 2019
New Malaysia: One year on
7 May 2019