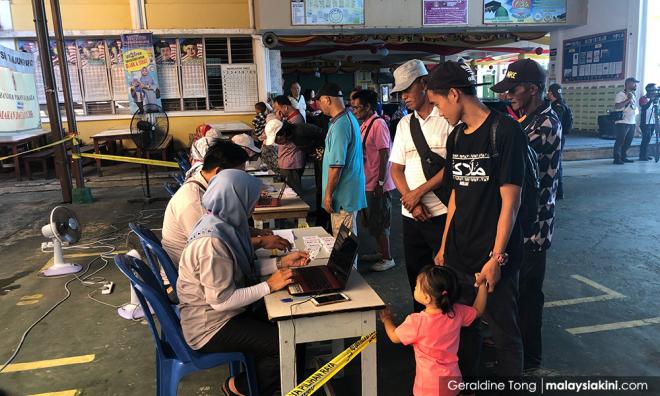 Polling kicks off in Sandakan by-election

Polling for the Sandakan parliamentary by-election began as soon as 19 polling stations involving 90 polling streams opened at 7.30am today.

A total of 39,684 ordinary voters are eligible to cast their ballots before the polling stations close at 5pm.

The Election Commission (EC) has stationed 798 workers at the polling stations and is anticipating a 70 percent voter turnout.

The tallying of votes will be conducted at the Activities Hall of Sekolah Menengah Jenis Kebangsaan Tiong Hua in Sandakan.

The Meteorological Department has predicted fine weather in the morning but thunderstorms in the late afternoon in a few places in Sandakan.

On May 7, 75 percent of the 270 early voters comprising police officers and rank-and-file personnel cast their ballots.

According to the electoral rolls, 51 percent of the voters in Sandakan are Chinese, 45 percent are Muslim bumiputera and the rest are of other races.

Some 49.48 percent of the voters are male and the rest female.

The Sandakan seat fell vacant after the MP Stephen Wong Tien Fatt died of a heart attack on March 28.

sandakanbyelection
Related Reports
Final showdown - Shafie Apdal vs 'Bossku'
10 May 2019
'Bossku' receives enthusiastic welcome in Sandakan
10 May 2019
Najib flies with three Harapan ministers to Sabah
10 May 2019
Will Harapan finally redeem itself in Sandakan?
10 May 2019