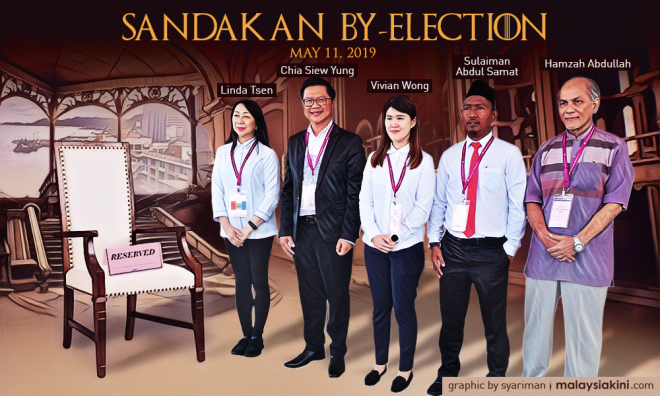 This wraps up Malaysiakini's coverage of the Sandakan by-election.

Key takeaways from this by-election

10pm - Here are some observations from the by-election's data:

In some ways, Wong outdid her father

9.25pm - Vivian Wong has secured a bigger vote share and a bigger majority than what her father Stephen Wong achieved in GE14.

In this by-election, his daughter Vivian secured 74.18 percent of the vote and a 11,531 majority over PBS' Linda Tsen, the closest competitor.

It should be noted that comparing the vote share is more meaningful than the majority, especially when it's not a straight fight.

Sabah's own 'Bossku' hopes Umno gets the message

9.20pm - In a statement, Sabah Chief Minister Mohd Shafie Apdal thanks voters for Vivian Wong's victory. He also says that Wong's victory is an endorsement of his government.

"This victory is a victory of the people as well as an endorsement of the Warisan-led government.

"The win is also a very clear indication that Umno no longer has any effect on the Muslim voters who this time around have come out very strongly in support of the DAP candidate," he said.

9.15pm - SMK Tiong Hua - Vivian Wong celebrates her victory with a tribute to her father.

"Without him, I am not able to sit here to talk to all of you. He groomed me to become the person I am today, a strong young lady. Winning today is not just a win for myself, but for my father.

"First thing I’m going to do is to visit my father’s grave tomorrow and personally thank him," she says at a press conference after being declared the by-election winner.

She also thanks Sabah Chief Minister Shafie Apdal and all those who campaigned for her as well as the voters in Sandakan.

She says she has already received a few complaints from locals and will get to work on improving matters in the constituency.

Below are the official result:

“The voters have chosen and we respect the decision of the voters. We hope DAP will honour all the promises they made to the people.

Ongkili says while the results were unsatisfactory for it, it showed that the party was still a force to be reckoned with.

“PBS put up a good fight but in the end, we could not overcome the might we were facing. God bless Sandakan, Sabah and Malaysia," he adds.

8.30pm - Najib Abdul Razak's visit to Sandakan yesterday had indeed given DAP a scare, according to its secretary-general Lim Guan Eng.

However, Guan Eng said that Sabah Chief Minister Mohd Shafie Apdal had prevailed over the "Bossku" from Peninsular Malaysia.

"'Bossku' (Najib) had forgotten that people are angry over corruption and that the people of Sabah have rejected Umno, PAS and PBS.

"This is a victory for the people of Sandakan. It was unexpected," he said.

8pm - In any by-election, the turnout will be lower than the preceding general election and Sandakan is no different.

Hence mobilisation of supporters and voters is key.

This is where PBS falters. It has little presence to begin with as the Liberal Democratic Party and Gerakan were BN's representatives in Sandakan since 1995.

Their campaign couldn't match the energy, reach and pace of DAP and their allies.

PBS also didn't go into this campaign with actual allies. Sometimes, other opposition parties would hold campaigning activities without any PBS involvement.

DAP made gains in Muslim vote

7.40pm - DAP looks set to capture the Sim Sim and Pulau Berhala voting districts which have the highest concentration of Muslim voters in the constituency.

The Sim Sim and Pulau Berhala voting districts were the focal point for Sabah Umno, PAS and former Umno leaders who campaigned for PBS.

However, it should be pointed out that Sabah Chief Minister Mohd Shafie Apdal and his Parti Warisan Sabah colleagues had been heavily campaigning in these voting districts as well.

Swing in early and postal votes?

7.25pm - From the unofficial count, it looks like Pakatan Harapan has done better in terms of postal and early voters, unlike the past three by-elections.

There is also a noticeable swing to DAP amongst postal and early voters when compared with GE14 results.

7pm - Malaysiakini is calling the Sandakan by-election in favour of DAP.

At the time of writing, assuming that the turnout rate is 55 percent, then DAP has attained an unassailable lead, capturing 73.95 percent of the vote share, according to an unofficial count.

As for PBS, the party is currently sitting at second place with 21 percent of the vote share.

Some 150 DAP supporters at their operation centre are ecstatic. Each time new numbers are announced, they burst into cheers.

6.40pm - Malaysiakini estimates that the overall turnout is 55 percent. Based on that figure, then nearly half the votes cast today has been counted at this moment.

Unofficially, DAP is leading the count by a wide margin of 8,766 votes with 77.83 percent of the vote share.

The nearest competitor is PBS, with 17.96 percent of the vote share.

Looks like Harapan losing streak could end in Sandakan.

6.23pm - UNOFFICIALLY, DAP's Vivian Wong (seated in white below) has won the Pasar voting district with 89.96 percent of the vote share, followed by PBS' Linda Tsen with 7.83 percent.

The turnout for this voting district is roughly 63.8 percent.

Officially, the overall turnout as of 4pm is 51 percent. There are 40,218 voters in total.

5.30pm - Voting ended at 5pm and the counting process is underway.