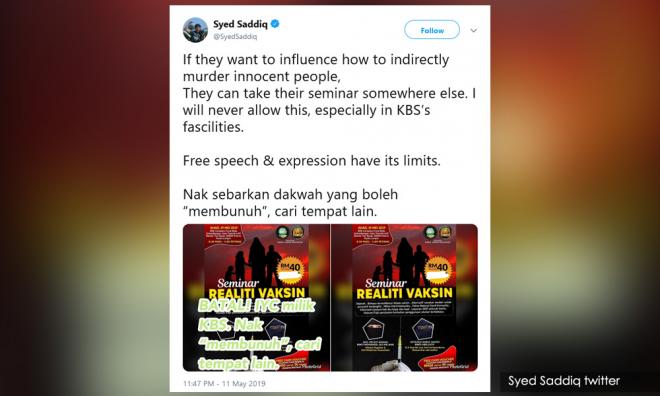 According to a poster Syed Saddiq shared on Twitter today, the talk on May 19 was to be on the "reality" of vaccines and its "hidden dangers," the "myths about herd immunity" and "alternative modern treatment for infectious diseases".

The seminar was to be held at the International Youth Centre in Cheras, which is owned by the Youth and Sports Ministry.

"If they want to influence how to indirectly murder innocent people, they can take their seminar somewhere else," he tweeted.

"I will never allow this, especially in the Youth and Sports Ministry's facilities. Free speech and expression have its limits."

Putrajaya is working to make vaccinations a legal requirement.

Health Minister Dzulkefly Ahmad previously said that the government is considering a proposal to make vaccines for measles, mumps, and rubella (MMR), and diphtheria compulsory.

Deputy Women, Family and Community Development Minister Hannah Yeoh, meanwhile, had called for parents who do not vaccinate their children to be charged with neglect.