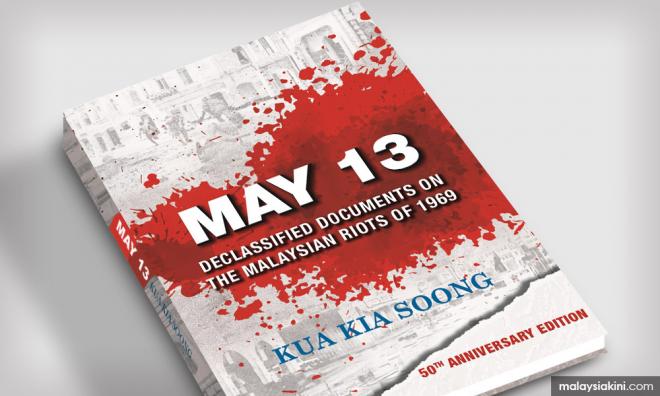 50 years on, it's time to declassify the secrets of May 13

COMMENT | The scale of the response to my 2007 book, May 13: Declassified Documents on the Malaysian Riots of 1969 was so overwhelming, it took me by surprise.

The book seemed to have struck a chord among those longing for release to the years of pent-up emotions around this dark episode in Malaysian history, one that has soured ethnic relations ever since.

I have now republished a 50th anniversary edition of the book, with a new preface on the contemporary political scenario in the country.

The main thesis of this book is that the orchestrated pogrom against the Chinese in Kuala Lumpur in 1969 was an attempt by the emergent Malay state capitalist class to create a situation to justify the coup d’etat against Tunku Abdul Rahman in the state of emergency that followed.

At the same time, this new ruling class set out to warn all challenges to the status quo that any questioning of ketuanan Melayu thereafter would face possible bloodletting.

The evidence supporting the book’s central thesis explodes the myth created by the Malaysian state that the May 13 incident was a spontaneous riot following the 1969 general elections, caused by “insensitive provocation by the Chinese-based opposition.”

Who were the victims?

We owe it to those who perished to at least register their unfortunate demise and grant some reparation to their loved ones. Where are the mass graves, besides those at Sungai Buloh?

There are other stories about corpses being tarred to conceal their ethnic identities, corroborated by doctors working in Kuala Lumpur hospitals at the time.

As with the mass graves in Wang Kelian, their bodies should be exhumed and identified and the cause of death determined, considering so many were tarred and buried without ceremony.

These are facts that a Truth and Reconciliation Commission can uncover about events at that time through listening to testimonies from the victims’ families and friends, doctors and nurses on duty in the hospitals, Red Cross staff who played an important role, police officers and soldiers on duty, politicians and journalists who covered the event, and of course, our ubiquitous Special Branch.

Public institutions should be made to open their files to such a commission as a basis for restoring truth and reconciliation.

Perhaps now that the supposedly ‘new’ Pakatan Harapan government is in power, it is time to act like a mature and enlightened democracy and declassify the official secrets in the vaults of the cabinet and the Special Branch.

We will then be able to get to the full story of the May 13 incident, now that 50 years have passed. Official secrets are declassified after 30 years, which is how I was able to research the May 13 documents.

Do you have a May 13 story? Join the conversation - share your stories or read more from others who were there.

So, are the government and our historians interested in what really happened on that fateful day? Who started the violence? Who were the 'hidden hands' alluded to in Said Zahari’s immortal poem on the incident? How many casualties were there, really? Or are they more interested in the status quo and peddling the same old ghost story that we no longer believe in?

The reason the publication of this book created such a sensation is that many Malaysians do not find the official version credible. The official statistics of the death toll are the least credible of all.

Since the publication of this book, I have received many eyewitness accounts and they all confirm that the number of bodies, many of which were tarred, certainly exceeded the official figures. The documents in the book testify as much.

What has happened to the Freedom of Information Act promised by Pakatan Harapan in its election manifesto? Will we be able to ask for information on May 13 if and when this law is legislated? Only time will tell.

For Malaysians to thoroughly exorcise the May 13 ghost, we need to establish a Truth and Reconciliation Commission to uncover the culprits responsible for orchestrating the pogrom, to identify and document the victims, to pay respect to all those who lost their lives, to hear the testimonies of the police, the army, hospital staff and participants, as well as to hear from all those who were traumatised during those weeks in 1969.

Compared to South Africa’s acrimonious saga of apartheid rule, the May 13 incident will not incur the same time and effort that the country's Truth and Reconciliation Commission went through.

The South African commission was established by the new government in 1995 to help bring about a reconciliation of its people by uncovering the truth about human rights violations that occurred during the apartheid.

Its emphasis was on getting to the truth, and not on prosecuting individuals for past crimes. The commission was open to the public and allowed victims or their loved ones to tell their stories. These documented accounts then became public record, which helps deter the possibility of any denial of the history.

In 1999, Rwanda began its National Unity and Reconciliation Commission (NURC) in order to work towards a reconciliation of the conflicting parties involved in the Rwandan civil war and genocide, with the eventual goal of reunifying the country’s citizens.

Isn’t it time for our own Truth and Reconciliation Commission to finally put to rest the ghost of May 13, to have the courage to record and confront our real history, and to bring about meaningful reconciliation of our peoples once and for all?

A monument to the victims

The Japanese occupation of Malaya during the war was marked by brutality and unspeakable atrocities, especially against the ethnic Chinese in Malaya and Singapore.

Now, 50 years on from the May 13 Incident, imagine the powerful impact it would have if the government of the day were to use this anniversary as an opportunity to remember its past and honour the victims of the pogrom.

A monument to the victims of May 13 would more than ever stand for the fundamental importance of human rights, and against racist violence. If we are truly to become a nation at peace with itself, the symbolic value of such a monument can no longer be ignored.

Admittedly, Umno remains a political force that will continue to harp on ketuanan Melayu, since it remains one of the biggest parties in Parliament.

After BN lost Penang in the 2008 election, the state chapter of Umno retaliated by taking to the streets of Seberang Jaya in the hundreds chanting “Hidup Melayu” with provocative banners, including one asking if the state's ruling coalition wanted another May 13.

One leader added, "If we lose our patience, please don't blame us." Once again, they had let the cat out of the bag. Such a response by Umno, among others, merely confirms the thesis of my book that the May 13 pogrom had been orchestrated.

Since the 14th general election, and the survival of Umno and PAS as the choice of some Malay voters, the prime minister has once again been pandering to Malay supremacist demands.

The recent flip-flops over the ratification of the International Convention on the Eradication of All Forms of Racial Discrimination (Icerd) and the Rome Statute on the International Criminal Court (ICC) are alarming signs of the lack of commitment to human rights by the ruling Harapan government.

Article 7 of the ICC is particularly relevant for bringing to justice those responsible for “crimes against humanity”, such as that which happened during May 13.

Today, the opponents of Icerd are so emboldened they can openly declare that they will unleash violence if the government goes ahead with the ratification of the treaty.

It reminds us of the prelude to Operation Lalang in 1987, when Umno Youth threatened to hold a 500,000 rally in Kuala Lumpur against the Chinese educationists who were protesting against unqualified administrators being sent to Chinese schools.

Instead of acting against the organisers of this threat, civil society members were arrested and detained under the Internal Security Act 1960.

Since there is no political will expressed by the new government to ratify the United Nations instrument, it looks like we are stuck with the never-ending racially defined economic, social and cultural policies for some time yet.

For a start, how could there be any political will when the prime minister himself is the leader of a racially-based party meant exclusively for the pribumi?

Aside from that, the other supposedly 'democratic' and 'multiracial' component parties of the Harapan coalition have failed the Malaysian people, in the same way that MCA and MIC failed them by condoning the racial discrimination of the previous BN administration.

By failing to ratify Icerd, the new Harapan government can carry on with all the racially discriminatory policies and measures that we have seen in the past, especially since 1971, notably crony capitalism and the abuse of the quota system. These are the real legacies of May 13.

The day will remain a spectre haunting the Malaysian collective conscience as long as racism and racial discrimination are not outlawed in our society.

Sadly, without any indication that the current government will launch a Truth and Reconciliation Commission or even erect a memorial to those who perished, to lay this ghost to rest, this book remains as relevant today as it was in 2007.

KUA KIA SOONG is the adviser for Suaram.

Do you have a May 13 story? Join the conversation - share your stories or read more from others who were there.