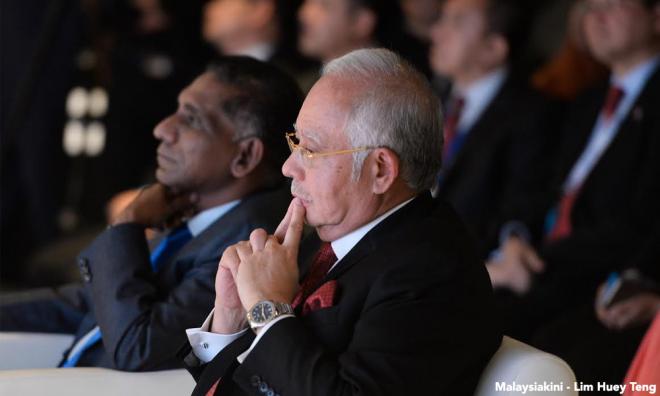 Earlier, Jamil informed the court that the initial dates set to hear the case, from July 8 to Aug 22 this year, had been vacated.

Nazlan said the earlier dates had been vacated by the court to give way to the court to hear the case involving SRC International Sdn Bhd.

On Oct 25 last year, Najib and Irwan pleaded not guilty to six counts of CBT when the case was brought before the Sessions Court.

On the first count, they are jointly charged with, in their capacity as finance minister and Treasury secretary-general respectively, committing CBT on RM1.2 billion belonging to the government,

On the second count, they were jointly charged with committing CBT of RM655 million belonging to the government.

On the third count, they were jointly charged with committing CBT of RM220 million belonging to the government in the Federal Consolidated Fund under the “Belanja Mengurus di bawah Maksud B11 Perkhidmatan Am Perbendaharaan, Aktiviti 021700 KL International Airport Berhad (KLIAB)” that was entrusted to them.

The two men are also jointly accused of committing CBT of RM1.3 billion that was entrusted to them under the Federal Consolidated Fund under “Maksud B11 Perkhidmatan Am Perbendaharaan, Aktiviti 020500 Subsidi Dan Bantuan Tunai”, belonging to the government.

On the fifth and sixth charges, they allegedly committed CBT of 1.95 billion yuan (RM1.26 billion) and RM2 billion, respectively, belonging to the government.

Najib and Irwan are alleged to have committed all the offences at the Finance Ministry Complex in Putrajaya between Dec 21, 2016, and Dec 18, 2017.

They were charged under Section 409 of the Penal Code, read together with Section 34 of the same code, which provides for a maximum jail term of 20 years and whipping, and fine, if found guilty.