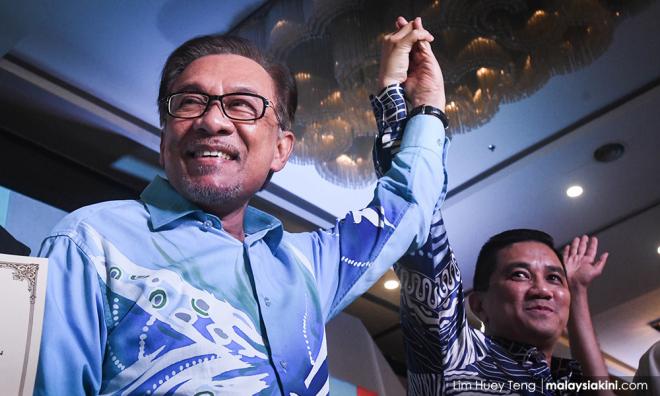 PAS secretary-general Takiyuddin Hassan’s statement questioning if Anwar Ibrahim is fit to be prime minister, since he is a former convict, has been described as irresponsible by PKR deputy president Mohamed Azmin Ali.

Azmin said what Takiyuddin had stated was also unfair because the PKR president had received a royal pardon.

He said the people were aware that the charges against Anwar were politically motivated and that he was eventually given a full pardon by the Yang di-Pertuan Agong.

"We may have different political views but we must stick to the facts, and the fact is that this crisis was well resolved in the interest of the nation," he said at a breaking-of-fast ceremony organised by the Rubber Industry Smallholders Development Authority (Risda) yesterday.

Speaking at a Sandakan by-election campaign last Wednesday, Takiyuddin questioned whether the people wanted a former convict like Anwar as prime minister.

Meanwhile, Azmin reminded PAS to resolve its internal problems without associating them with other parties, including the recent issue of its "dedak cartel".

"I'm not a PAS member. I am not involved with what is happening in PAS. I think it is their internal problem and they need to resolve it.

The media had reported that Abdul Hadi's son-in-law, Zaharudin Muhammad, a former member of the PAS Syura Ulama Council, had revealed that there was a "dedak cartel" within the party.

He was believed to be referring to people in PAS who allegedly received funds from Umno.