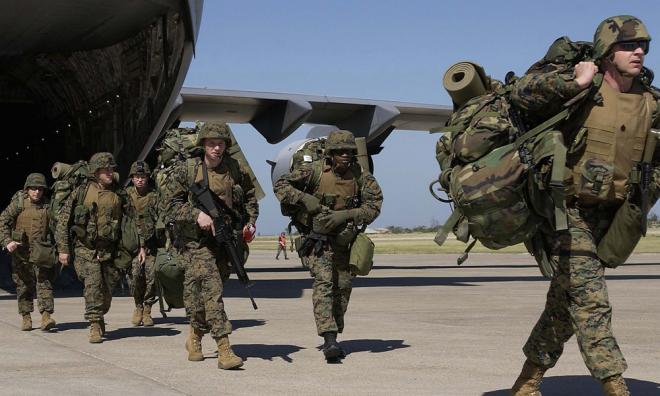 President Donald Trump on Tuesday denied a New York Times report that US officials were discussing a military plan to send up to 120,000 troops to the Middle East to counter any attack or nuclear weapons acceleration by Iran.

“I think it’s fake news, OK? Now, would I do that? Absolutely. But we have not planned for that. Hopefully we’re not going to have to plan for that. And if we did that, we’d send a hell of a lot more troops than that,” Trump told reporters at the White House.

The Times reported that Acting Defence Secretary Patrick Shanahan (below) presented an updated plan last week in a meeting of top national security aides that envisions sending as many as 120,000 American troops to the region if Iran attacks US forces or accelerates work on its nuclear weapons.

The updated plan does not call for a land invasion of Iran, which would require far more troops, the Times reported, citing unidentified administration officials.

Meanwhile, Saudi Arabia said armed drones struck two of its oil pumping stations on Tuesday, two days after the sabotage of oil tankers near the United Arab Emirates, and the US military said it was braced for “possibly imminent threats to US forces in Iraq” from Iran-backed forces.

The attacks took place against a backdrop of US-Iranian tension following Washington’s decision this month to try to cut Iran’s oil exports to zero and to beef up its military presence in the Gulf in response to what it said were Iranian threats.

Tuesday’s attacks on the pumping stations more than 320 km west of Riyadh and Sunday’s on four tankers off Fujairah emirate have raised concerns that the United States and Iran might be inching toward military conflict.

Iran’s Supreme Leader Ayatollah Ali Khamenei (above) said there would not be war with the US despite mounting tensions over Iranian nuclear capabilities, its missile programme and its support for proxies in Yemen, Iraq, Syria and Lebanon.

“There won’t be any war. The Iranian nation has chosen the path of resistance,” he said in comments carried by Iran’s state TV. He repeated that Tehran would not negotiate with Washington over Iran’s 2015 nuclear deal with major powers.

The US military cited possible imminent threats to its troops in Iraq and said they were now on high alert. The US was responding to comments from a British deputy commander of the US-led coalition fighting Islamic State remnants in Iraq and Syria who said there had been no increase in the threat from Iran-backed militia.

The comments “run counter to the identified credible threats available to intelligence from US and allies regarding Iranian backed forces in the region,” said Navy Captain Bill Urban, a spokesman at the US military’s Central Command.

Trump withdrew the United States from the Iran nuclear deal a year ago and has sharply increased economic sanctions on Iran.

Under the accord negotiated by Trump’s predecessor Barack Obama, Iran agreed to curb its uranium enrichment capacity, a potential pathway to a nuclear bomb, in return for sanctions relief.

The Trump administration’s sanctions are designed to choke off Iran’s oil exports in an effort to force Iran to accept more stringent limits on its nuclear and missile programmes, as well as to rein in its support for proxy forces in the region.

US national security agencies believe proxies sympathetic to or working for Iran may have sabotaged the tankers near the UAE rather than Iranian forces themselves, a US official familiar with the latest US assessments said.

The official said possible perpetrators might include Houthi rebels in Yemen and Iran-backed Shi’ite militias based in Iraq, but Washington had no hard evidence. On Monday, a US official said Iran was a leading candidate for the tanker sabotage, but the United States did not have conclusive proof.

Iran rejects the allegation of Iranian involvement and Iranian Foreign Minister Mohammad Javad Zarif said that “extremist individuals” in the US government were pursuing dangerous policies.

“Iran is not falling to its knees,” said the diplomat on condition of anonymity, saying Iran could resume its nuclear work and leave Washington with no option, but military action.

“Does Trump want to go to war with Iran, especially during an election campaign year?” he asked.

Democratic Party candidates are already campaigning ahead of the November 2020 US election aiming to stop Republican Trump being re-elected.

Houthi-run Masirah TV earlier said the group had carried out drone attacks on “vital” Saudi installations in response to “continued aggression and blockade” on Yemen.

A Saudi-led coalition has been battling the Houthis for four years in Yemen to try to restore the internationally recognised government in a conflict widely seen as a Saudi-Iran proxy war.

The Houthis have hit Saudi cities with drones and missiles, but two Saudi sources told Reuters this was the first time a facility of the state-run Aramco had been attacked by drones.

Aramco said it had temporarily shut down the East-West pipeline, known as Petroline, to evaluate its condition. The pipeline mainly transports crude from the kingdom’s eastern fields to the port of Yanbu, which lies north of Bab al-Mandeb.

The energy minister of Saudi Arabia, the world’s largest oil exporter, said the latest attacks caused a fire, now contained, and minor damage at one pump station, but did not disrupt oil output or exports of crude and petroleum products.

Oil prices rose on news of the attack on the Saudi pumping stations. Brent futures gained US$1.01, or 1.4 percent, to settle at US$71.24 a barrel.

It quoted the cabinet as saying it was the international community’s shared responsibility “to preserve maritime safety and oil tankers security in anticipation of any effects on energy markets, and the danger of that on world economy.”

The UAE has not blamed anyone for what it called sabotage on the vessels. The UAE said the other tankers hit were a UAE-flagged fuel bunker barge and a Norwegian-registered oil products tanker near Fujairah, one of the world’s largest bunkering hubs just outside the Strait of Hormuz.

A fifth of global oil consumption passes through the strait from Middle East crude producers to much of the world.

A UAE official told Reuters the UAE was working with local and international partners from the United States, Saudi Arabia, Norway and France - which has a naval base in Abu Dhabi - to “fully investigate the incident and to identify the people or entities responsible.”