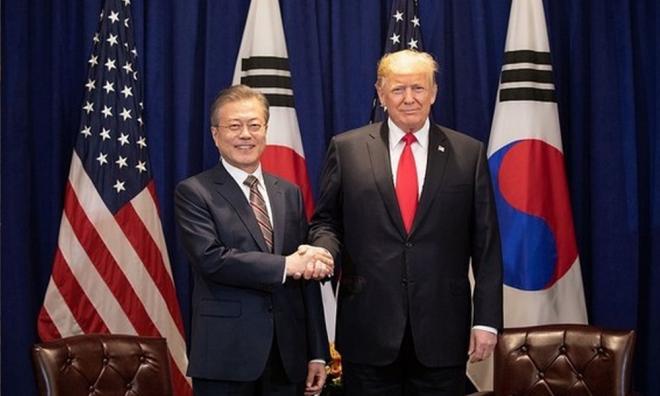 Trump to visit South Korea in June for summit with Moon

US President Donald Trump will visit South Korea next month for a summit with President Moon Jae In expected to focus on North Korea and the bilateral alliance, both sides announced Wednesday.

According to Yonhap news agency, citing the announcement made by South Korean government and the US, Trump's visit will be in conjunction with his travel to Japan to attend the G20 summit slated for June 28-29.

The two leaders plan to discuss ways to establish a permanent peace regime on the Korean Peninsula through the North's complete denuclearisation, as well as to strengthen the bilateral alliance, Cheong Wa Dae spokeswoman Ko Min Jung said.

"The two leaders will also discuss ways to strengthen the United States–Republic of Korea (South Korea) alliance and the friendship between our two peoples."

Trump last travelled to South Korea in November 2017 amid heightened tensions over North Korea's tests of nuclear weapons and ballistic missiles potentially capable of striking the US.

Last year saw a flurry of diplomacy aimed at denuclearising the North, including three summits between Moon and North Korean leader Kim Jong Un and an unprecedented US-North Korea summit between Trump and Kim.

Trump and Kim held a second summit in Vietnam in February to negotiate the North's denuclearisation in exchange for sanctions relief.

After that meeting ended without a deal, the two sides have struggled to break the impasse.

Moon travelled to Washington last month to hold talks with Trump and attempt to revive the negotiations.

Tensions have renewed after North Korea fired a series of projectiles, including short-range missiles, into the East Sea on May 4 and 9.

The US announced last week that it has, for the first time, seized a North Korean cargo vessel suspected of carrying coal exports in violation of UN sanctions on the regime.