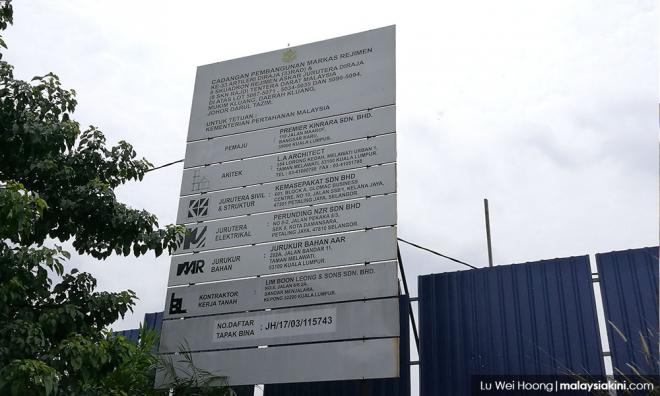 An investigating committee looking into the background of the Paloh army camp has called for enforcement officials to probe an aide of former defence minister Hishammuddin Hussein and three former top government officials.

The recommendation was made in a report prepared by the Governance, Procurement and Finance Investigating Committee, and released earlier this week.

The aide, a political secretary, had issued an internal administrative memo dated February 10, 2016, to influence the ministry in the purchase of private land to set up an army camp.

The memo, sent to the secretary-general, stated that a secretariat meeting of the Sembrong parliamentary constituency had agreed to build an army camp and army housings at Paloh.

This was because a surplus of RM184 million which resulted from the Kinrara army camp land swap deal after the government found the value of the 94-acre land given to the developer had increased over time.

The Paloh army camp and army housing are in the Sembrong constituency which was won by Hishammuddin.

Another memo, dated March 24, 2016, by an aide of the then secretary-general of the ministry, provided justification for the Paloh camp project.

"It explained that the proposal was one of the strategies that would increase the majority vote of Paloh state constituency in GE14 because (BN candidate only) won the seat with 103 majority votes in GE13," read the report.

The project would shift 500 army voters and their spouses from another camp at Mahkota, Kluang, Johor.

In GE14, Harapan, however, defeated BN with a majority vote of 784 in Paloh.

"There was abuse of power and (the appearance) of political interest in the implementation of the project," read the report.

The report also named three other former top brass in the ministry and army force to be probed.

The former secretary-general and the ex-army chief had agreed to the purchase of 62 acres of land in Paloh in a meeting on Jan 27, 2017.

As for the deputy secretary-general, he signed a letter that enabled the land purchase in Paloh to be carried out.

All the above alleged 'wrongdoing' took place before the contract agreement was finalised and inked. The cabinet only gave tjhe greenlight to the Paloh army camp on Dec 20, 2017.

The report pointed out the involvement of the then defence minister and the then prime minister.

However, it did not call for action to be taken against both Umno MPs.

Najib received a letter, believed to have been sent by the developer, asking the government to hasten the proposed reconstruction of the Kinrara camp, and he put a note on that letter on June 2, 2011.

"YB XX, please bring (the proposal) for consideration of the government via Ukas (Public Private Partnership Unit)," he wrote.

In the same month, the then defence minister Ahmad Zahid Hamidi instructed the secretary-general of the ministry to issue a letter of intent to the developer.

In February, Harapan Defence Minister Mohamad Sabu disclosed that 16 of his ministry’s projects suffered over RM500 million losses due to mismanagement and other factors.

On May 9, Mohamad tabled a 59-page report on the 16 land swap deals at Dewan Negara. The ministry has also published separate reports on these deals since Monday.

The reports concluded that army camps in Bera, Segamat, Hutan Melintang and Paloh were built with the intention of moving in army voters ahead of GE14.

Meanwhile, the report also noted the 'interference of administrative member' in another land swap project.

Zahid was said to have instructed the hastening of the project of the Regiment 514 Territorial Army camp and the reconstruction of army housing at Terendak camp, Melaka.

In this project worth RM264 million, 206 acres of land in Rawang would be leased to the developer for 99 years.

"Please speed up action to meet the need to Armed Force; according to the letter of intent issued," Zahid put in a note on a letter on Oct 19, 2011.

"The move could be seen as limiting the option of the implementing agency such as Ukas and the ministry when carrying out the procurement process," pointed out the report.

The contract was awarded via direct negotiation, in defiance of the open tender suggestion by the Attorney-General's Chambers and Finance Ministry.

While the cabinet gave its green light in November 2012, the project has not been inked until today.

The investigation committee suggested the project should be carried via open tender and with due diligence if the government decides to carry on with the project.