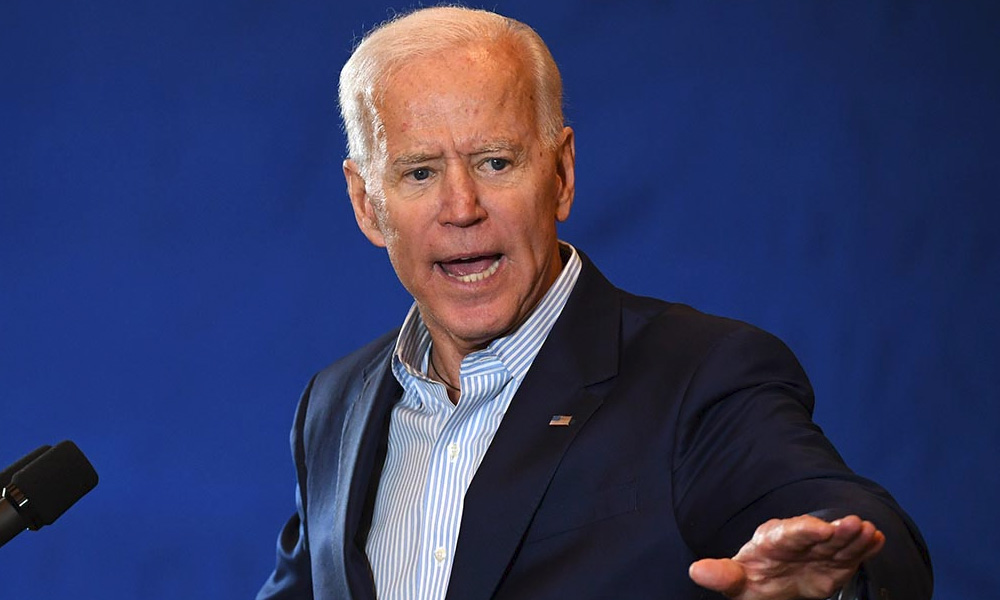 Seeking to build on early momentum in his 2020 presidential bid, former US vice-president Joe Biden on Saturday condemned “anger” within his own Democratic Party and pledged to work to unify the country in the wake of Donald Trump’s presidency.

At a rally in downtown Philadelphia, Biden, as he has done throughout the beginning stages of his campaign, made Trump his central target, blasting him as “the divider-in-chief.”

But he also chided other Democratic presidential candidates in the field, suggesting that anger toward Trump within his party was not enough to win next year’s presidential election.

“Some of the smart folks say Democrats don’t want to hear about unity,” he said.

“They say Democrats are so angry, and that the angrier your campaign will be, the better chance you have to win the Democratic nomination. Well, I don’t believe it.”

About 6,000 people attended the rally, which had, by design, the feel of a general-election event. With his poll numbers currently swamping the rest of the Democratic field, Biden has often acted as if his current opponent is Trump (photo) and not the other 23 Democrats vying for the party’s nomination.

“If the American people want a president to add to our division, to lead with a clenched fist, closed hand, a hard heart, to demonise the opponents and spew hatred - they don’t need me, they’ve got President Donald Trump,” Biden told the crowd.

Democratic nominating contests begin next February, giving the dynamics of the race plenty of time to shift. But Biden, 76, has opened up a more than 20-point lead over his nearest rival, US Senator Bernie Sanders, in several public opinion polls.

Biden, a US senator for 30 years and a two-term vice-president under Barack Obama, has argued he is best positioned to take on Trump next year.

Attendees at the event said they agreed.

“He’s going to be the one who takes Trump out of office,” said Daril Murard, 27, of Langhorne, Pennsylvania. “That’s why I’m here.”

Tim Reihm, 48, drove to the event from his hometown of York, Pennsylvania.

“There’s been a tendency in the party to drift a little too far left and I think that’s going to disenfranchise a large section of the country,” Reihm said. “Joe represents a more middle ground where we can bring people together, instead of becoming more fractious.”

Biden also answered critics who have mocked his pledge to work with Republicans as unrealistic should he win the White House.

“I’m going to say something outrageous,” he said. “I know how to make government work.”

A fundraising memo sent to members after the rally accused Biden of trying to splinter the party.

“Joe Biden is dividing Americans when, after the historic 2018 election, he tells voters they are wrong to be angry - and wrong if they don’t want ‘unity’ with corrupt Republican politicians,” the memo said.

“We don’t need a Democratic nominee who rejects the fact that people are righteously angry in the Trump era,” it said.

Biden has established his campaign headquarters in Philadelphia, illustrating the importance of Pennsylvania to Democratic hopes next year. Trump narrowly won the state over Hillary Clinton in 2016.

Trump will hold an event of his own on Monday in northeast Pennsylvania.

Prior to Biden’s speech, the Republican National Committee in a release pointed to statistics showing how Pennsylvania’s economy has improved during Trump’s presidency.

Biden will not have the luxury of shrugging off the rest of the Democratic field much longer.

In recent weeks, he has been criticised by Senator Kamala Harris for his past support for the 1994 crime bill that critics say led to mass incarceration of African-Americans, by Sanders for his support of the North American Free Trade Agreement, and by Warren for his ties to the credit-card industry.

With Biden the clear front-runner, those attacks are likely to intensify. But Biden on Saturday said he would keep his focus on Trump and not his rivals for the nomination.

“You will not hear me speak ill of another Democrat,” Biden said.

Following the Philadelphia event, Biden is expected to spend the next several weeks focusing on policy announcements and raising money.