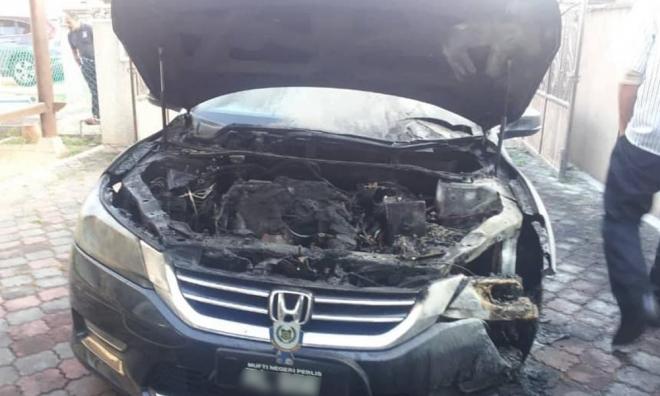 Police have detained the suspect who was believed to have set the official car of Perlis Mufti Mohd Asri Zainul Abidin on fire on March 22.

Perlis police chief Noor Mushar Mohamad said the unemployed suspect, 36, was detained at his home in Kampung Jelempok, Arau, at 2.45am on Saturday.

“The suspect confessed that he carried out the act with a friend who is still at large, 'Mie Tomoi,' for payment of RM500, after he was paid to do so by another person,” he said when contacted today.

Noor Mushar said the suspect also revealed that five more persons were also involved, three of whom have been identified and will be arrested soon.

Police also seized the suspect’s handphone and said he has five previous offences and was sentenced twice.

According to Noor Mushar, the suspect said that several days later, Mie Tomoi took him to meet three other persons on a mission to cause harm to the mufti.

“One of them was believed to have offered to pay a large amount of money to the suspect and the friend to splash acid on Asri’s face, but they did not agree to it.

"However, Mie Tomoi and the suspect agreed to set Asri’s car on fire for a sum of money.

“Several days later, the friend arrived at the suspect’s house on a motorcycle and later went in his Proton Waja car to a house in Titi Tok Bandar, Kangar,” he said.

Noor Mushar added that another suspect, known as "Dik E", handed the two a backpack, jacket, plastic bottles and helmets, and they then rode Mie Tomoi's motorcycle to a petrol station in Kodiang, Kedah where they filled the plastic bottles with petrol, before heading to the mufti's house.

He said Mie Tomoi splashed petrol on the mufti’s car and the suspect lit a fire and smashed the rear windshield with a rod.

After the job was done, the duo returned home after they burnt the items they had used, he said.

“Several days later, the suspect met a person at a convenience store in Kangar and asked for a payment of RM5,000. However, the person only paid him RM500,” Noor Mushar said.

He added that the suspect was remanded at the Kangar Court yesterday for four days, and police have identified three of the five persons involved in the case, and will arrest them soon.

On March 22, two men set fire to Asri’s official car and were detected in a CCTV recording in his neighbour’s house in Jalan Persiaran Wawasan here.

In the incident at 5.45am, a black Honda Accord car was burnt in the engine and left front tyre, while the front and back windscreens had been smashed.