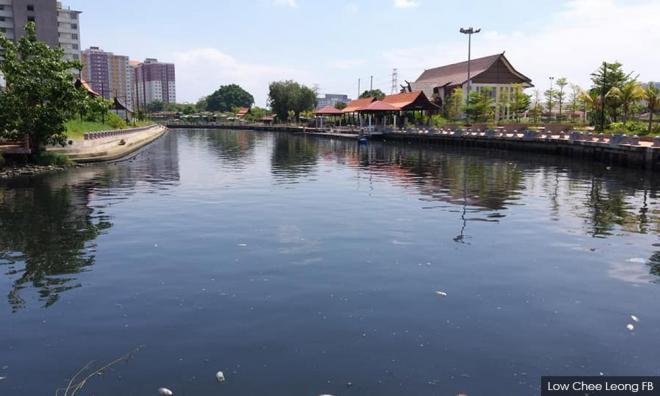 Pollution has caused the water in Malacca River to turn black and foul-smelling with dead fish since yesterday, especially in Taman Rempah.

Malacca exco Low Chee Leong said the pollution was detected to be from the Batu Hampar Dam in Batu Berendam, which has been instructed to be shut down immediately to prevent the situation from getting worse.

“We worry that the pollution will get worse and do not want a repeat of the chemical pollution in Sungai Kim Kim, Pasir Gudang,” the Kota Laksamana assemblyperson said in a press conference in Taman Rempah today.

“We have asked the Environment Department and the Health Department to take immediate action, and get a sample of the contaminated river water and the dead fish for analysis to find out the cause of pollution and level of seriousness."

Also present was the CEO of the Malacca River and Coastal Development Corporation (PPSPM) Azlan Abidin.

According to Azlan, at midnight tonight, PPSPM will flush the water by opening the dam at the river mouth and ensure that the Batu Hampar Dam is closed so that the polluted river water will flow out to sea.

He said since this morning, about 60 PPSPM staff have been involved in cleaning the dam of the dead fish and rubbish.

“According to the initial information from PPSPM technical staff, the pollution water was from Batu Hampar and they are now outside the area to determine the source (of pollution).

"In Malim too, the water has turned black like here and samples have been taken to be sent to the DOE,” he said.

Azlan said PPSPM has received complaints from the public, including passengers on the Malacca River Cruise, of the foul smell and change in colour of the water.

He added that if the problem was not immediately resolved, the PPSPM will probably temporarily close down the Malacca River Cruise operations.