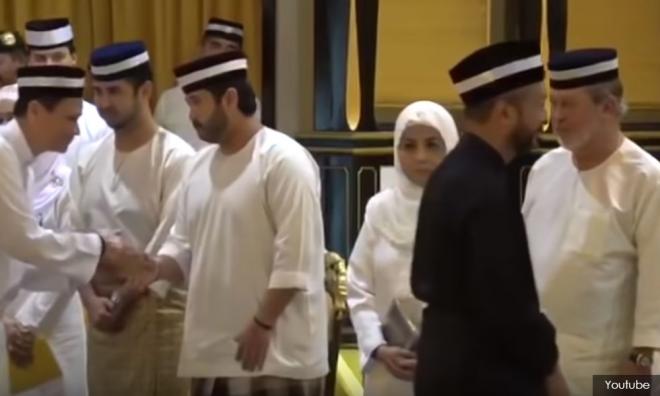 The crown prince responded with the clasped hands emoticon in response to Friends of Johor's tweet, which accused Prime Minister Dr Mahathir Mohamad's son of being arrogant.

"The difference between two men, @HRHJohorII (Tunku Ismail) shook Tun M's hand but Mukhriz was too arrogant to shake SOJ's (Sultan of Johor's) hand at Istana Abu Bakar (in Pekan, Pahang)," read the tweet from the @FriendOfJohor twitter handle.

In the 14-second clip, Mukhriz, who arrived at Istana Abu Bakar to pay his last respects to the late Sultan of Pahang Sultan Ahmad Shah Al-Musta'in Billah yesterday, is seen walking past members of the Johor royal household.

Malaysiakini has contacted Mukhriz, who is also Bersatu deputy president, for comment.

Mahathir and the Johor palace have locked horns on various issues such as the Rome Statute of the International Criminal Court, the appointment of the state menteri besar and the reshuffle of the executive council.

Early this month, the prime minister also launched an acerbic salvo against the crown prince, calling him stupid and telling him not to comment on matters beyond his knowledge.

Mahathir was asked to comment on Tunku Ismail's statement that his father's good deeds, such as giving lands to the people and government, were not highlighted.

The crown prince's statement came in the wake of a revelation that a plot of federal land earmarked for the Johor Bahru-Singapore Rapid Transit System (RTS) was transferred to the ruler.