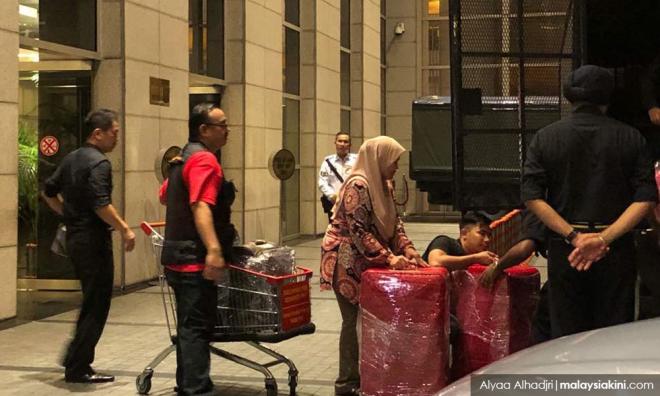 Not all 44 pieces of jewellery in police custody, claims law firm

A Lebanese jewellery firm, which filed an RM60 million suit against former prime minister’s wife Rosmah Mansor over 44 pieces of jewellery, claimed that not all jewellery pieces were in the custody of the authority.

Global Royalty Trading SAL filed the suit against Rosmah on June 26 last year, seeking the return of the 44 pieces of jewellery sent to her for selection or pay the price for all the items amounting to US$14.79 million or almost RM60 million.

Lawyer David Gurupatham, representing the jeweller, told reporters that his client had inspected the seized jewellery and had made a statement to the police that not all the pieces were there (in the authority’s custody).

“I can’t say how many pieces are there because we have not filed the necessary documents. Once we filed it, we will be able to explain the position. So this has to be verified,” he said when asked how many pieces of the jewellery belonged to his client were in the custody of the authority.

Gurupatham said his client had also sought to become an intervenor in the government’s forfeiture suit against the items seized before High Court judge Mohamed Zaini Mazlan.

“We have written to the Attorney-General’s Chambers (AGC) to ask for the details of the forfeiture suit. They have replied and so now we will intervene in the action.

“We will verify whether the pieces of jewellery are there and what is not there. Then we will proceed with the trial,” he told reporters after the matter came up for case management before High Court judge Wong Chee Lin.

He also said the court had fixed Sept 17 and from Oct 21 to 24 for the trial of the suit and Aug 19 for case management in Kuala Lumpur today.

On May 7, the AGC filed a notice of forfeiture over hundreds of items including branded handbags and 27 vehicles seized from Najib, Rosmah, their three children and 13 individuals and companies and the case has been set for case management on July 8 before Justice Mohamed Zaini.

Last Feb 14, the High Court ordered Rosmah to check and confirm in seven days the existence of the 44 pieces of jewellery that were in her possession but were allegedly seized by police.

In its suit, Global Royalty claimed that on Feb 10, 2018, they sent 44 pieces of jewellery including diamond necklaces, earrings, rings, bracelets and tiaras, each worth between US$124,000 and US$925,000 to the defendant with hand carry courier via its two agents.

The company said during the delivery, Rosmah confirmed and accepted the terms as well as conditions in Memorandum No. 926 relating to the jewellery.

It also claimed that Rosmah, in a letter dated May 22, 2018, also confirmed and acknowledged receiving the jewellery concerned but said all the jewellery were no longer in her possession, and they had been confiscated and were now being kept by the Malaysian authorities.

Global Royalty is seeking the court´s declaration that the firm was the owner of the 44 pieces of jewellery apart from the order that ownership of the jewellery was not transferred to the defendant.