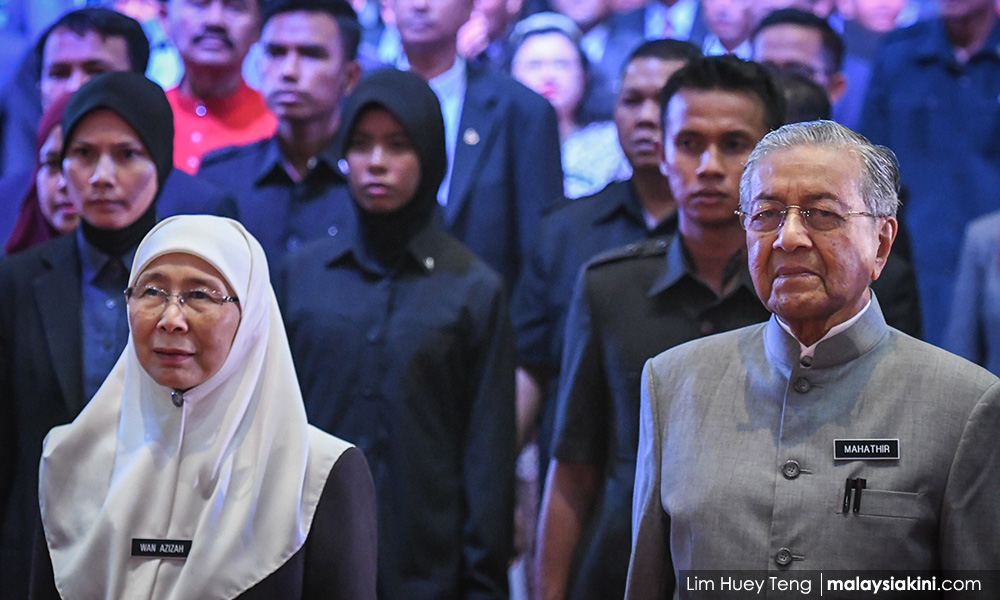 COMMENT | A failed state, or, failed government, is when all things cease to function — especially the rule of law.

Yet, rule of law, according to the likes of classical political theorists like Thomas Hobbes, can only be enforced by "the Leviathan”; what we normally called a state.

Others like John Stuart Mill and Jean Jacques Rosseau argued that with or without a state to enforce the rule of law, the social contract between the citizenry is enough to maintain the collective cohesion to keep a society intact.

As an ex-colony of the British Empire, Malaysia has the residuals of the English of Anglo-Saxon system.

Under the English legal system, laws are shaped and made on the basis of previous precedents, even when there is no Constitution; as is the case with the United Kingdom.

Pakatan Harapan, one must remember, inherited the best of all features above on May 9, 2018. But Harapan also inherited a kleptocratic system that emptied, if not completely, disembowelled the administrative, fiscal, financial and judicial systems wholesale.

When the laws came close to nabbing Prime Minister Najib Abdul Razak in July 2015, soon after the release of the report of the US Department of Justice, several investigating officers in Malaysia who were bent on doing the right thing were charged under Section 124 of Penal Code.

The latter allows the detention and arrest of any one of up to 20 years or more for ostensibly challenging the democratically elected government.

Had Najib and BN government won on May 9 last year, the legal and police fraternities would likely have witnessed one of the worst infamies.

Countless whistleblowers, some of whom included the likes of the current Inspector-General of Police  Abdul Hamid Bador, would have been put under arrest for trying to undermine a democratically elected government.

I was not spared too. Arrested, detained, interrogated and released on police bail just for tweeting on 1MDB-related issues.

The laws on fake news, which were passed by Najib and BN, would have been used against local and foreign journalists in Malaysia, some of whom were writing in Financial Times, The Washington Post, the Wall Street Journal, South China Morning Post, and The Economist.

Malaysia, in other words, was well on the way to becoming both a banana republic and a kangaroo court.

But Malaysia was saved from the precipice of both kleptocracy, kakistocracy, and, more importantly, an aristocracy that has gone amok.

Only the rules and orders from the top were right. All others were wrong. In that sense, only Najib and his wife constituted the first and final voice on all issues.

Little wonder the natural transition of Najib, after his fall, was a social media blitz that tried to challenge the opinions of all Malaysians and non-Malaysians who were sick of his denials and lies. The outcome?

'Malu Apa Bossku?' — a PR campaign that was meant to appeal to the B40, hoping that this group of impoverished people would take a liking to the prospect of gravitating to the infamous duo, in exchange for financial returns.

Come what may, Malaysia under Harapan has not become a failed state. It is one that has internalised and imported some of the dysfunctionalities of the Najib regimes but it has not failed abjectly and abysmally.

There are three reasons. First of all, even if the Kuala Lumpur Stock Exchange (KLSE) is one of the non-performers in Asia, one has to contend with the fact that Malaysia is a trade-dependent exporting country.

When the US and China are in the thick of a high tech-trade war, the repercussions on the semiconductor industries in Penang Duty Free Export Zones, are bound to be direct.

Stocks cannot perform when Washington and Beijing are in a head butt. All Malaysia can do is watch and hope to be spared from the more deleterious effects of a major trade war.

Secondly, Malaysia cannot be expected to jump like a proverbial springbok, even if Prime Minister Dr Mahathir Mohamad is bent on transforming the country into Asian Tiger once again.

Between 2003 and 2018, two prime ministers malperformed. That's a lot of cobwebs and vested interest to be cleared.

Thirdly, Malaysia cannot perform well, precisely because the previous administration has willy-nilly locked Malaysia into unfair contracts, such as those in ECRL.

If Malaysia withdraws from the contract, punitive charges by the billions of ringgit would be imposed. When they do, especially if Malaysia cannot pay the RM1.2 trillion debt, our ratings across Fitch, Moody's and Standard and Poor's will take a severe beating.

Malaysia is not falling. Nor is it failing. It is trying to pick up the pieces of the previous administration.

A failed state is when the cost of living is not merely escalating, but spirals beyond the reach of most.

Pakatan Harapan
failed state
painful transition
Mahathir Mohamad
Najib Abdul Razak
Related Reports
The post-GE14 electoral reform journey
a year ago
One year of false hopes
a year ago
Harapan needs a backbone
a year ago
Harapan will not be a one-term gov't, vows minister
a year ago