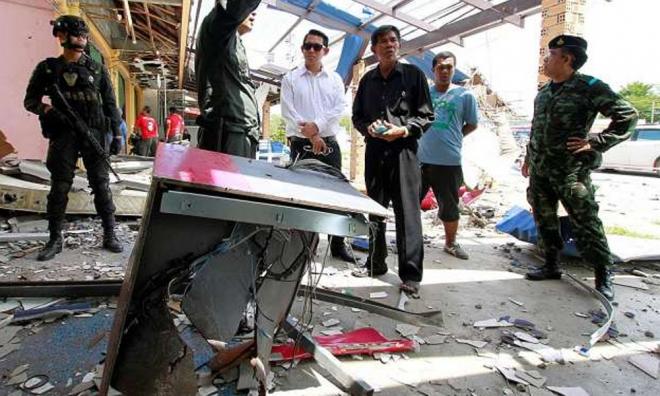 A policeman was killed while four others were injured when a bomb, believed to have been buried underground, exploded when police were carrying out checks behind a railway station in Chana, Songkhla in southern Thailand.

Ninth division police chief lieutenant-general Ronnasin Phusara said the homemade bomb exploded, killing one policeman and injuring three of his colleagues who were on duty during the 6pm incident.

"A woman who was at the scene was also injured. The victims are undergoing treatment at the Chana Hospital,” he said.

He said all the routes to the site of the incident have been closed for further investigation.

"The police are tracking down the group that masterminded the blast,” he said.

In April 2017, a policeman and a four-year-old boy were killed, while 15 others were injured in a bomb explosion at the same railway station.

Meanwhile, in Pattani, president of the Teluk Kapur Administration Council was shot dead on his way home at 11.30pm (local time) yesterday.

Amad Promkeaw, 57, died on the spot. He was the second president of an administrative council to be shot dead within three days.

Last Thursday, the president of the Tha Thong administration council in the Raman District in Yala was shot dead on his way home, after breaking fast with family members elsewhere.