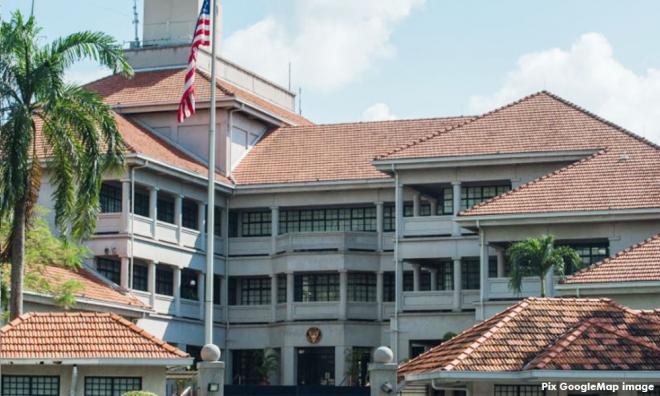 PSM slams 'arrogant' US Embassy, urges minister to press on with 11-year case

PSM has criticised the US Embassy for opting not to participate in a legal dispute involving a former employee.

The party urged Human Resources Minister M Kulasegaran, who brought the case before the Industrial Court, to continue pressing forward with the case.

At a court hearing last Friday, lawyers representing the embassy said their client will not be responding or appearing in court for a suit involving the alleged unlawful dismissal of its former security guard Subramaniam Letchimanan.

In a May 16 diplomatic note sent to Wisma Putra, which was reproduced during the hearing, the embassy contended that it had been served a “defective” court notice.

“Article 22 of the Vienna Convention on Diplomatic Relations provides for the inviolability of embassy premises.

“Article 22 precludes foreign courts and litigants from directly serving any form of legal process at the embassy as such service is inconsistent with the embassy’s inviolability,” it said, adding that any such service ought to be done through the proper diplomatic channels with at least 60 days notice.

The embassy said it was served a notice on May 14, 10 days before the May 24 hearing.

Furthermore, the embassy contended that it had been “improperly named” as a defendant in the case as it should have been the United States government.

“Due to the defective service, the United States is not a party in this case, will not file a response or appear at the hearing, and will not recognise the validity of any judgment that might be rendered against the US or in any way prejudices the interests of the US,” the note states.

In response to this, PSM central committee member S Arutchelvan (below) said the embassy had exhibited its “arrogance” in dealing with Subramaniam’s alleged unfair dismissal, which took place 11 years ago in 2008.

He urged Kulasegaran to continue pursuing justice for the Malaysian.

“It looks to us now that the US is making all this very complicated to avoid a hearing in the court.

“PSM hopes the minister will not buckle under pressure and will stand firm with the decision.

“The case may look like a simple dismissal case, but it has some great consequences. The case will decide if workers working in the embassies will get any protection under our law, and secondly, it will put the whole question of sovereignty of a nation under question if we cannot summon a foreign government for exploiting our worker in our soil,” Arutchelvan said in a statement today.

According to PSM, which has been assisting with the case since 2008, Subramaniam had worked at the embassy for 20 years before he was informed through a phone call that he had been terminated with immediate effect.

Over the past 11 years, he tried pursuing his case with the IRD, Wisma Putra, the Human Resources Ministry, as well as the US Embassy, but was not offered any chance for a resolution of the case.