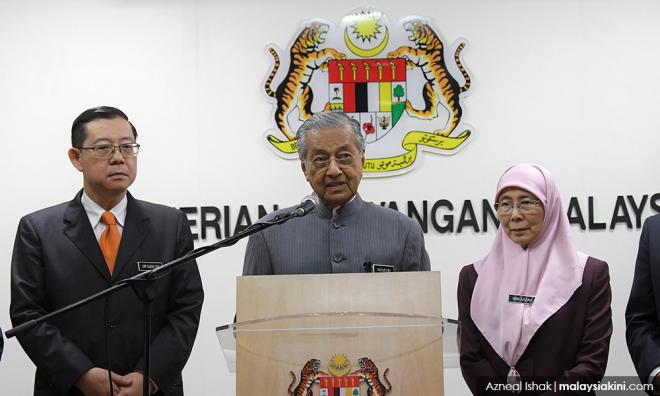 The federal government has agreed to write off the loan given to the state government for the rural water supply project on 2001 onward, said Prime Minister Dr Mahathir Mohamad today.

He said the loan was based on the balance that had not been settled on Dec 31, 2018 with the total amount of RM3.8 billion, which was subject to the state government to finalise the restructuring of water supply by Dec 31, 2019 at the latest.

For the future, Mahathir said the rural water supply project would no longer be financed in the form of a soft loan from the federal government but allocated in the form of a grant under regulations of the Rural Development Ministry.

"It is hoped that the implementation of the write-off could speed up the restructuring of the water supply industry and reduce the annual financial burden of the state as well as ensuring that continued benefits could be enjoyed by the people in the long term,” he said at a media conference after chairing the National Financial Council Meeting in Putrajaya today.

At the same time, Mahathir said the state operating company could focus attention on improving the water supply service quality.

At the meeting today, the prime minister also said the federal government had agreed to approve an additional allocation of RM60 million for the state governments beginning this year.

He said the additional allocation was to finance the new rate of Allocation Based on the Level of Development of the Economy, Infrastructure and Wellbeing (Tahap) of the people beginning 2019, aimed at protecting the forest and marine protection areas and helping the states earning less revenue to implement programs and projects in order to raise state revenue.

Mahathir said the meeting also agreed to approve the granting of 50 percent of revenue from the collection of tourism tax to become a new grant to the state government beginning this year.

The granting of half of the tax collection would help the state governments to maintain and provide tourism facilities, as well as promote and market tourist destinations besides improving the reporting of tourism statistics, he said.

"We have imposed a tax payment of RM10 per room and so on. The collection is actually for the federal government and we have agreed to give back 50 percent to the state government,” he added.

Meanwhile, in improving safety for road users, he said the government had improved the Malaysian Road Record Information System (Marris) including by expanding the expenditure allowed for financing road maintenance which did not reach the minimum standards of the Public Works Department and not registered in the online Marris system.

The improvement included involving expenditure to upgrade the roads, bridges, drains with a maximum of not more than 15 percent of the real maintenance expenditure of the previous year or 15 million, whichever was lower, he said.

"So we can improve existing roads but excluding village roads, as they are financed by other channels,” he added.

According to the Prime Minister, the decision of the meeting today had directly raised assistance to the state governments by taking into account the deficit suffered by the states.