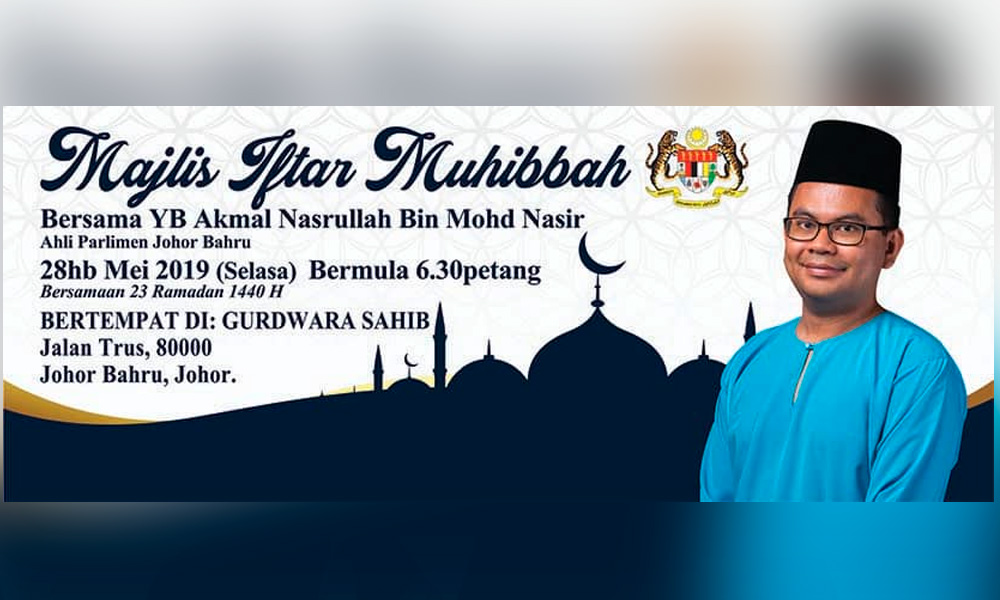 Johor Bahru MP Akmal Nasir has defended his breaking fast programme to be held at a gurdwara (Sikh temple) in the state this evening.

In a Facebook posting today, Akmal listed several reasons for his doing so, stating that tonight would not be the first time he has broken his fast at a gurdwara as he had also been invited to do so by some friends last year.

The only difference, he said, was that last year he did not publicise it. He said he was initially hesitant to accept the invitation and had consulted those who had faced a similar situation.

Akmal said he also had his staff visit the gurdwara to speak with the organisers.

“I had never entered a Sikh temple before in my whole life. I was hesitant to accept the invitation (last year) as it could create all sorts of impressions and criticisms.

“I finally accepted the invitation after I found [that] the food consumed by the Sikh community at the gurdwara was 100 percent vegan. They (at the temple) are not just vegans when they issue invites for iftar (breaking of the Muslim fast), but all the time.

“Their ways are stricter. When they enter the gurdwara, they must cover their heads [...] last year I wore a kopiah,” he posted.

Akmal, who is also PKR Youth chief, added that he discovered the Sikh community had prepared an empty hall for visiting Muslims to perform their maghrib prayers, separate from the Sikh prayer area.

He said: “There is no mixing of their ceremonies (with the Muslim prayers) as their praying space is on another floor.”

Akmal had posted his explanation over his decision to attend the event at the Sikh house of worship after it came under criticism online.

A Facebook account belonging to the group "Ops Johor" posted the invitation for tonight’s event at the Gurdwara Sahib in Johor, along with the caption: “Let’s break fast at a temple, only then will it be harmonious?

“[....] the fasting month, we are supposed to grace mosques or surau, not temples or tokong.”

Ops Johor questioned the Islamic faith of the new leaders and claimed that holding such an event at the gurdwara was disrespectful of the fasting month.

The group further accused Akmal of doing so for his own political interests.

“Ops Johor suggests that in the future, YB holds a breaking of fast ceremony in a Chinese graveyard or at a tokong. Only then will it look different and harmonious, confirm gempak (exciting).”