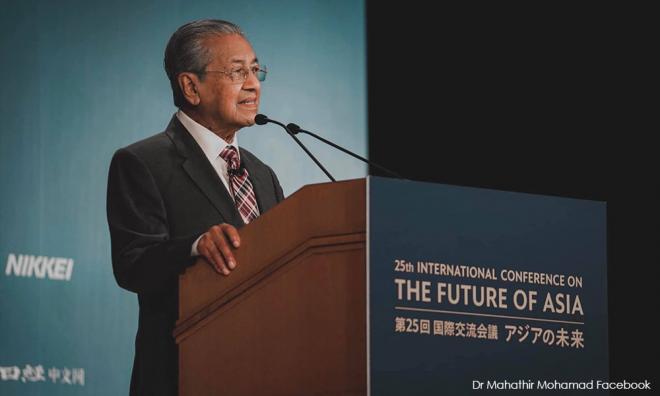 Prime Minister Dr Mahathir Mohamad has called for a new world order which opts for negotiation and arbitration to resolve conflicts between nations.

Speaking at the Nikkei Future of Asia conference in Tokyo today, Mahathir said that the existing world orders are "primitive" in believing that such disputes can only be resolved through confrontation and war.

"We know the situation in the world is not stable. We see problems everywhere – in Latin America, in Europe, in Asia, in the Middle East, in every part of the world.

"There is a confrontation between US and China, and all these things are not good for the whole world," he said.

"We are all affected even if we are not the contestants. When two elephants fight, it is the grass or whatever is underneath that gets trampled.

"We need a new order, because we have several world orders which seem to have failed.

"They have failed because we are still quite primitive, we are still relatively uncivilised. We think that conflicts can be resolved through war, through the destruction and killing of people."

Mahathir cited the Asean experience, with Malaysia choosing to resolve issues with its neighbours – such as territorial disputes with Singapore and Indonesia – by way of negotiation, arbitration and the court of law.

Mahathir also noted that there are occasional disputes with Beijing, particularly over lopsided infrastructure development contracts.

"We, of course, faced problems with an emerging China that is very aggressive because it has become very rich," he said.

"We negotiated with China and reduced the value of these contracts, so it is not detrimental to our own financial situation," he said.

Confrontations, he added, would only push contestants to grow their militaries, and thereby pose a threat to other neighbouring countries.

He said global superpowers should accept the fact that other countries may rise and excel in industries which they once dominated.

"Today, the East has learned all about research and development. There is no longer a question of copying products from the West. They produce better products now.

"What the West should do is accept products from the East, and try to excel in their own way. If not in the same field, find other areas where you have some competitive advantage.

"Don't try and compete in areas that you cannot excel in. Each part of the world must learn what its principal strength is, and concentrate on that," he said.

Mahathir said that different regions around the world must establish their own conferences to mete out resolutions to conflicts.

Asked about possible security risks in Huawei Technologies' 5G network, Mahathir admitted that Malaysia needs the technology it provides, which should eclipse any concerns about espionage.

"We are too small to have any effect on a huge company like Huawei, whose research is far bigger than Malaysia's entire research capability. So we try to make use of their technology as much as possible.

"Yes, there may be spying or whatever, but what is there to spy on in Malaysia? We are an open book, everybody knows that.

"If any country wants to invade Malaysia, they can walk through and we will not resist because it is a waste of time," he said.

Mahathir out to correct M'sian mindset on 'free money'
30 May 2019
Mahathir proposes common East Asia currency pegged to gold
30 May 2019
Why Japan holds the key in Asia, not China
29 May 2019
Dr M says M'sia on right track, cites quality education ranking
16 May 2019