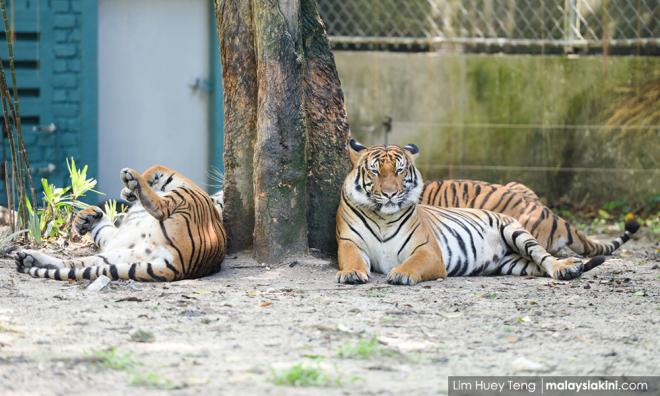 Zoo Negara battling to return to its glory days

There was a time when Zoo Negara, filled with all kinds of mammals, birds, reptiles and fish, attracted millions of Malaysians of all ages.

The zoo, which was established in 1963 over 110 hectares of land in Hulu Kelang, recorded over one million visitors in 1986.

Over time it has accommodated about 5,137 specimens from 476 species of mammals, birds, reptiles, amphibians and fish.

But it has been plagued by falling attendance despite efforts made by the administration for the zoo to return to its glory days.

This included the entry of two giant pandas, Fu Wa and Feng Yi, loaned by the Chinese government in 2014 through the Giant Panda International Conservation Cooperation Agreement Programme.

National Zoo deputy president Rosly @ Rahmat Amat Lana said to address the issue and attract more visitors, Zoo Negara was in the midst of upgrading and improving the infrastructure in phases.

"We have planned various things including the Reptile House, Petting Zoo, Water Theme Park, and most importantly, changing the concept of the zoo into an open zoo, where animal confinements are being replaced with special mirrors.

"But all this involves high costs and needs to be done gradually, as Zoo Negara currently needs to bear the costs for animal care and staff amounting to RM1.2 million per month through various financial resources, including sponsorships. These costs include animal feed, medication, maintenance and salaries for employees," he told Bernama.

Rosly said the National Zoo had made various improvements to ensure the RM45 charged for an adult ticket was worth the price.

"If we compare, the price we charge is cheaper than the ‘mini zoos’ in theme parks or other private zoos, with the number of animals here totalling over 4,000 from 200 species," he said.

He also felt it was important to correct the negative perception that animals found in Zoo Negara were thin, sleepy and kept in unattractive exhibition spaces, as it would eventually 'kill' people's interest to visit.

"Actually, every animal here has a special diet that needs to be followed to ensure they do not become obese and ultimately become sick or inactive."

"This is especially important because they live in confinement. They are not as free here as in their original habitat," he said.

He said the good physical health of the animals here also indirectly attracted zoos from abroad, especially from Singapore and Thailand, to participate in animal exchange programmes.

He said this proved that Zoo Negara had the best veterinary experts, who have been entrusted with looking after the giant pandas.

"We have four animal experts who have between five years to decades of experience in this field, led by the director of Zoology, Veterinary Hospital and Giant Panda Conservation Centre, Dr Mat Naim Ramli.

"Through their expertise, animals here are always kept in the best of shape, and they (the experts) are often called to other zoos and theme parks throughout Malaysia when their animals are facing health problems," he said.

Rosly explained that among other efforts being made to attract more visitors was working with several travel agencies to promote Zoo Negara as a tourist destination.

"We are outsourcing (the promotion), and the appointed travel agencies managed to bring in RM2.5 million (in revenue) last year, which is positive for us, especially as the visitors are now coming from more countries, including from the Middle East and Europe, as well as China," he said.

He added that previous initiatives such as volunteer programmes, night camping at the zoo, Fun Run, Zoo Walk and celebrating the birthdays of animals on a monthly basis, would also be revived.