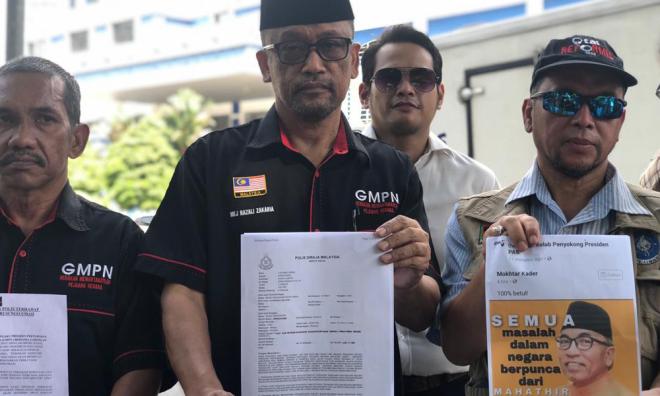 An NGO today lodged a police report over a viral video claiming that the death of firefighter Muhammad Adib Mohd Kassim in a riot was a government-orchestrated conspiracy carried out by the attorney-general.

Pertubuhan Gerakan Martabat Pejuang Negara (GMPN) made the report at the Dang Wangi district police headquarters in Kuala Lumpur, calling on the police and the MCMC to act on the matter.

GMPN chairman Maj (Rtd) Razali Zakaria said the allegation made by Gerakan Pembela Ummah chairperson Aminuddin Yahaya (above) could jeopardise the ongoing inquest into the death of Muhammad Adib.

“The malicious slander of the alleged conspiracy will not be accepted by the people, particularly the family of Muhammad Adib,” he told reporters after making the report.

Last Monday, lawyer Syazlin Mansor withdrew as the counsel for the Housing and Local Government Ministry, Fire & Rescue Department and Muhammad Adib’s family at the inquest, raising speculation and questions on the inquest.

Muhammad Adib, who was a member of the Emergency Medical Rescue Service (EMRS) at the Subang Jaya Fire & Rescue Station, was seriously injured in a riot at the Seafield Sri Maha Mariamman Temple in USJ 25, Subang Jaya, on Nov 27, 2018.

He died at the National Heart Institute 21 days later. He was 24. - Bernama