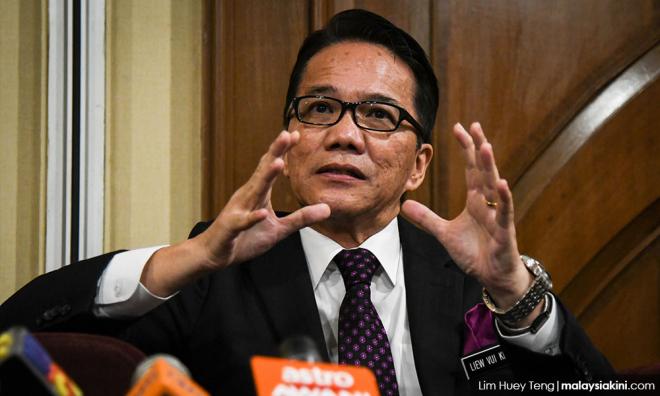 De facto Law Minister Liew Vui Keong today explained that the delay in setting up a royal commission of inquiry on the judiciary is due to a legal challenge to stop the move.

Speaking at a press conference during a Hari Raya event in his constituency of Batu Sapi, Liew noted that former Sabah chief minister Yong Teck Lee had filed an originating summons against the government to question the constitutionality of the RCI.

The minister said the law has to take its course, and that the government will wait for the outcome of the suit, which is fixed for July 2.

However, he said police and MACC investigation into any alleged judicial misconduct can still proceed despite the suit.

Yong, who filed the originating summons on April 29, named the federal government as respondent

He had previously argued that the RCI would be tantamount to executive interference.

Yong (photo) further contended that any wrongdoing in the judiciary can only be dealt via a tribunal.

According to the originating summons, he is seeking four declarations.

Firstly, Yong wants a declaration that the decision by Putrajaya to set up the RCI is unconstitutional as it will be in breach of the principle of separation of powers and Article 125 of the Federal Constitution.

Article 125 outlines the procedure for the suspension and removal of judges.

Yong also wants a declaration that the decision to set up the RCI is tainted with conflict of interest and also premature as it is premised on "unsubstantiated and general allegation."

Furthermore, he wants the high court to declare that the appropriate action is for the relevant authorities to first investigate the allegation.

Yong is also seeking for cost and other reliefs as the court may deem fit.

Putrajaya had in February agreed to set up an RCI after Court of Appeal judge Hamid Sultan Abu Backer alleged widespread corruption and abuses in the judiciary.

Liew Vui Keong
RCI
judiciary
Related Reports
No more delays, set up RCI on the judiciary now - Bar
a year ago
Putrajaya waiting on AG's Chambers for RCI on judiciary
a year ago
Judiciary RCI - process must be followed, says Azmin
a year ago
It's rule of law, not rule by law - CJ reminds judges
a year ago