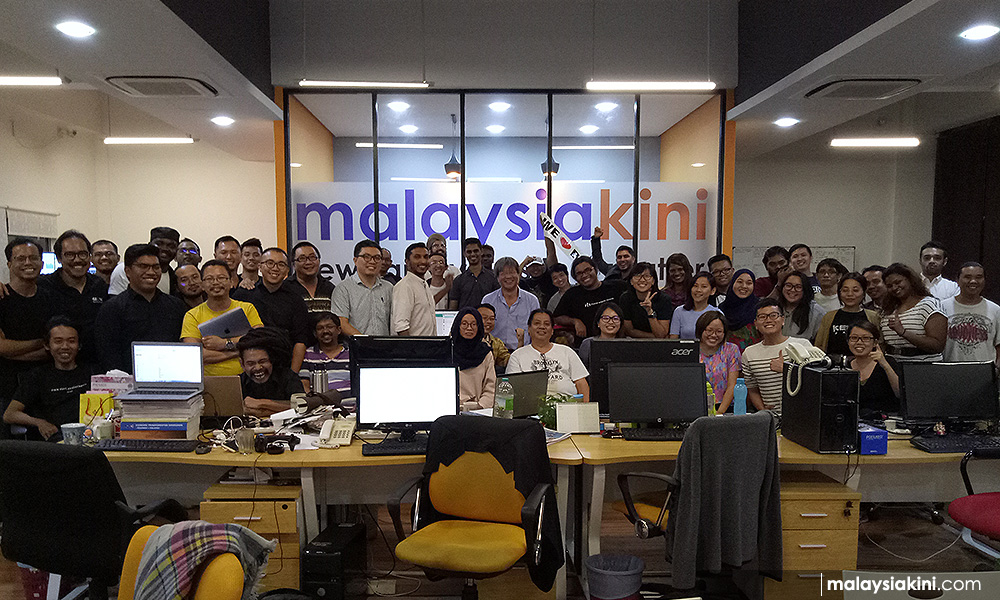 COMMENT | Allow me to extend, somewhat belatedly, my congratulations to Malaysiakini for winning the prestigious Society of Publishers in Asia 2019 Award for editorial excellence.

Malaysiakini’s recognition from SOPA came more than a year after its splendid, truthful and spirited coverage of Malaysia’s 14th General Election (GE14).

In congratulating the leadership of Malaysiakini I would highlight in particular the courage and perseverance of its news people and editors, their consistent adherence to the core values of factual and fair reporting, and the constant portrayal of accurate, balanced and generally well-researched articles.

Malaysiakini has stood out in the Southeast Asian region for setting its own exceptional high benchmark in the quality of reporting, analysing and putting out the news without fear or favour.

I would be remiss if I don’t mention that, like most Malaysians, I appreciate and applaud the unique role of Malaysiakini in approaching political developments in Malaysia in general, and GE14 in particular.

Unlike most news portals which would vie for sensationalising the news in order to capture a wider readership and advertising revenues and for a narrower constituency, Malaysiakini, for the most part, has adhered to a standard of factual and sober reporting and analysis.

In covering the events leading to Malaysia’s 14th General Election, the news portal was careful in presenting a balanced picture of the state of play between a well established, well-heeled and well oiled Barisan Nasional and a fledgling but redoubtable Pakatan Harapan.

The people’s choice between these two principal contestants in GE 14 could not be discerned, but the overkill strategies and histrionics created by ruling Barisan Nasional gave the impression that it was going to be a clear victory for them.

If I remember correctly, an overwhelming majority of our local polls analysts, a somewhat amorphous and amiable group, in order partly perhaps to not give the slightest offence to the sensitivity of BN or suffer oblivion, had conveniently assumed that the BN would win the election.

The only question being raised was, by what margin would BN win.

Najib Razak, the then BN leader and prime minister, was supremely confident of his BN coalition’s victory.

I became convinced of his obvious optimism when it was ascertained after GE14 that he had kept a large cache of cash in various currencies in excess of RM100 million in his well-appointed private residence which was provided the best security possible with public funds. Ironic but the national security authorities were protecting suspected ill-gotten assets.

Najib’s absolute control of government machinery, including the Election Commission, enabled him to disadvantage the Opposition in every way possible, through a controversial constituency reconfiguration exercise, redeploying postal voters, and deploying the state’s assets to fully assist the BN’s campaign

In the state of Sabah two of Najib’s self-avowed principal allies- Salleh Said Keruak and Abdul Rahman Dahlan - had become outrageously adversarial and cavalier in attacking Dr Mahathir and his ragtag political coalition and hyperactive in predicting their victory.

The powerful pro-Najib government machinery set the election for a Wednesday, rendering it costly, cumbersome and inconvenient for hundreds of thousands of voters to travel to their respective voting precincts.

More startlingly, the mainstream press and media allotted nearly 90 percent of their coverage to the BN’s campaign.

The country’s longest serving Member of Parliament, the respected and affable Tengku Razaleigh Hamzah, after maintaining a discreet silence, had on the eve of the election thrown his support behind Najib Razak and had been quoted as saying a victorious Najib would take the country to greater heights.

In this fraught and chillingly bleak electoral environment, the Pakatan Harapan was mounting a strong and seemingly sensational uphill pitch that it would deny the BN a simple majority; there also was talk of a hung parliament and perhaps a minuscule of PH candidates themselves imagined that they would be able to capture a few states and form a solid federal parliamentary opposition.

It was in this background and the toughest regulatory environment verging on repressive control by the Malaysian Multimedia and Communication Commission that Malaysiakini had to operate.

Overcoming obstacles to spread the truth

Malaysiakini’s offices had been raided much earlier, their reporters harassed and they had been subjected to rigorous control. Not quite Orwellian, but the strong-armed surveillance and suppression signals were hardly disguised.

It was in this tightly controlled media environment that Malaysiakini held its own, showed its monumental mettle, and stuck to its avowed mission of reporting factually and faithfully about the election.

Its people on the ground showed their prowess in following every lead, had refused to be intimidated by imperious officials, but kept monitoring and verifying minute by minute developments in every possible polling station, eliciting information from nervous and anxious party workers, and tried to prise data from tight-lipped and compromised Election Commission officials.

There was an unwritten rule that there would be the usual victory by the Najib- led BN as they had unfettered and exclusive control over news content and flow through the ownership and direct hold over the state broadcasting arm, government machinery, as well as the mainstream press and media.

Malaysiakini’s uniqueness on the evening of May 9th was that it was reporting on trends that there had been a sharp upsurge in the support for PH, the major opposition coalition, and a somewhat impressive showing for PAS, a conservative Islamic party.

Stunned Election Commission officials were delaying the release of the results, but Malaysiakini preempted those official results with their timely releases of unofficial tallies. Eventually, the EC had to acquiesce to Malaysiakini’s beckoning.

In the wee hours of May 10 2018, on the basis of largely Malaysiakini-driven unofficial results, Dr Mahathir Mohamad could claim that his coalition had obtained 113 seats in the 222-member House of Representatives to form the government.

At 11am that morning, some eighteen hours after the close of polling, Najib emerged like the besieged Saddam Hussein from his rathole, to concede victory to the Pakatan Harapan. He did not, however, offer his congratulations to the new prime minster-designate.

Malaysiakini had been an important part and a willing witness to that day of epochal significance when a ruling coalition of 61 years’ standing was replaced peacefully. The biggest winners that day were Malaysians. The victory was Malaysia’s entirely.

For the Mahathir Mohamad 2.0 Administration to deliver the full benefits of a freer, stable, successful and a more equitable society much time, perhaps a full decade, is needed.

The initial task was to form a new cabinet, lay the ground rules as a law-abiding administration and amend various draconian laws which had hinged the country to a predominantly powerful prime ministerial-centric system where the prime minster could manipulate and fashion the three separate branches of government to his sole advantage.

The reforms that are essential would entail obtaining the support of the substantial parliamentary opposition to amend various laws. For any real change to occur, the year-old government must continue to endeavour to bring about a true separation of powers.

There is considerable scope to enhance the quality of democracy, transparency and accountability in Malaysia.

Malaysia has all the ingredients, including the geographical centrality to be the media, transhipment and communications hub of East Asia being situated smack in the heart of Southeast Asia.

In this regard, with the dividends of greater press freedom and significantly dismantled authoritarianism, Malaysiakini could be the precursor to a much needed independent regional publication, owned and operated by nationals of the Asean and East Asian countries.

For that to happen the Malaysian civil service has to become more apolitical and dedicated to serving the national interest.

Further, it must exorcise itself of the pro-Najib elements which were self serving, self-promoting and enhanced their own salaries and perquisites without regard to the nation’s capacity to maintain them on inflated grades and salaries.

An estimated 50 of this sort of senior-level cadre have to be purged or pensioned off.

Then there is the larger agenda of addressing the pressing issues, including the high cost of living, affordable housing, education, health, security, environment, public transportation, crime, good governance and corruption.

Malaysiakini could prove to be an invaluable and trusted ally of the people of the country in addressing all or at least some of these issues.

The work plan is cut out for you to be a great partner of a respected and resurgent Malaysia.

M SANTHANANABAN is a retired Foreign Service officer whose last ambassadorial assignments were in Argentina and the Republic of Korea.

As an observer of political and economic developments in various countries including Nigeria, Hongkong, Laos, the United States, Papua New Guinea, The Central Asian region, Argentina and Korea, Santha remains upbeat about the future of Malaysia with the new government.