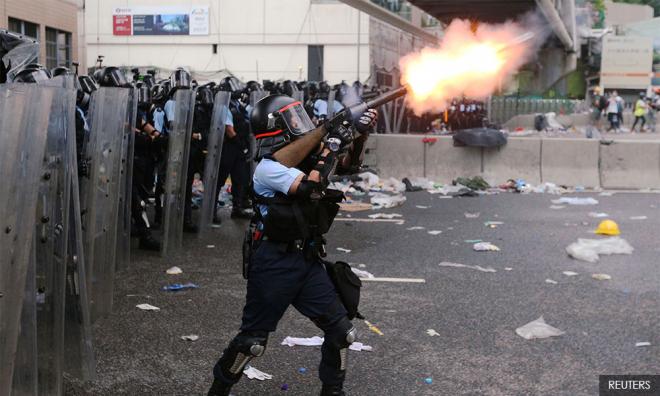 Uneasy calm in Hong Kong after a day of violence

Hong Kong riot police and protesters braced for possible further clashes across the city's financial district today, after a day of violence over an extradition bill that would allow people to be sent to mainland China for trial.

Hundreds of riot police could be seen resting and re-grouping overnight, while gaggles of protesters obtained fresh supplies of water, goggles and helmets, Reuters witnesses reported.

Police fired rubber bullets, tear gas and pepper spray in a series of skirmishes yesterday to clear demonstrators from the city's legislature.

It was some of the worst violence in Hong Kong since Britain handed it back to Chinese rule in 1997 with a guarantee of extensive autonomy and freedoms, including a separate legal system and freedom of speech.

The extradition bill has sparked unusually wide concerns, both locally and internationally, that the bill risks further encroachment from Chinese officials and threatens the rule of law that underpins Hong Kong's international financial status.

As of 10pm yesterday, 72 people had been hospitalised, including two classed as serious, according to the Hong Kong Hospital Authority.

Hong Kong authorities also announced the shutting down of all government offices in the city's financial district for the rest of the week.

Several thousand demonstrators remained near the legislature in the Admiralty District, while thousands more had retreated to the Central Business District, overlooked by the towers of some of Asia's biggest firms and hotel chains, including HSBC and AIA and the Mandarin Oriental.

Tourists looked bemused at the sight of abandoned luxury cars near the Mandarin. There were barricades over the doors of the Hong Kong Club, one of the city's oldest social institutions.

It was the third night of violence since a protest on Sunday drew what organisers said was more than a million people in the biggest street demonstration since the 1997 handover.

The benchmark Hang Seng Index closed 1.7 percent lower yesterday, having lost as much as two percent in the afternoon, while Chinese companies in Hong Kong ended down 1.2 percent.

While acknowledging the controversy, Lam (photo, below) has refused to postpone or withdraw the bill, which she and her officials say is necessary to plug "loopholes" allowing the city to be a haven for criminals wanted on the mainland.

US President Donald Trump, who is locked in a trade war with China, said the demonstrations were massive, but added that he expected the issue to be resolved.

The United States has extensive business interests in Hong Kong and has been struggling to formulate a response to the latest standoff, even as Trump battles Beijing on trade.

British Prime Minister Theresa May said extradition rules in Hong Kong had to respect the rights and freedoms set out in the 1984 Sino-British agreement on Hong Kong's future.

Amnesty International joined local rights groups in condemning yesterday's use of police force as excessive, while a spokesperson for the UN Human Rights Office in Geneva said it was following the situation closely.

"We call on all parties to express their views peacefully, and on Hong Kong's authorities to engage in an inclusive and transparent dialogue over the draft legislation," she said.