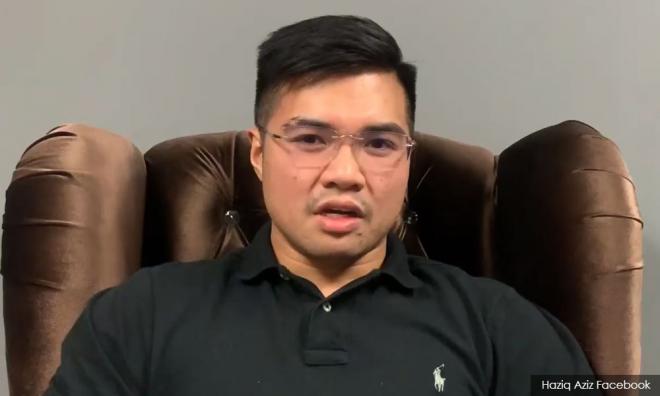 In a Facebook posting this morning, he also referred to Prime Minister Dr Mahathir Mohamad dismissing the video clips of the alleged encounter as fake.

“The lack of support for my sworn testimony (video confession yesterday morning) has made me question the sincerity of our new government in pursuing reformasi.

“I have been accused of having a political agenda by the prime minister after making the confession,” he added.

Haziq also claimed that Azmin's political secretary Hilman Idham met him at a restaurant in Marriot Putrajaya in a bid to force him to protect the minister.

“I waited for an hour and it felt like I was a mere afterthought.

“He forced me to deny it was you in the viral video and asked me to lie for you. I asked for more time to consult my parents and this angered him.

“After I refused he made threats and said 'this' will be shut down within 48 hours with or without my help to lie.

“It broke me that Azmin, the man I looked up to, chose to tie his loose ends rather than owning up to his mistakes. I know you are a sick man because only you could have recorded the videos for personal collection after inviting me to your hotel room on all occasions.

“First it was at the Grand Continental Kuching three years ago, then at Pullman Kuching during pemilihan parti (party polls) in October last year. We did it again in Grand Hyatt KL during your stint as 'menteri pengiring' (accompanying minister) to the Sultan of Brunei in March this year and our recent encounter at Four Points Sandakan last month,” he added.

Haziq, who is the senior private secretary to Primary Industries Deputy Minister Shamsul Iskandar Md Akin, is also concerned that more videos would be leaked.

“... The luxury you have as a minister is deniability whereas my future is over. You even have the prime minister pledging his full support before any formal investigation had been done.

“Only the truth can set me free as I am concerned for the safety of my family and mine. I hope the public will see you as who you truly are- manipulative and has immense influence together with your henchmen Hilman, (Penang exco Dr) Afif (Baharddin), (Housing and Local Government Minister) Zuraida (Kamaruddin) and the rest of your inner circle that are motivated by greed and power,” he added.

Malaysiakini has contacted Hilman, Afif and Zuraida for comment.

Yesterday, Azmin denied that it was him in the sex clips being leaked by anonymous individuals. The minister described this as a diabolical plot to ruin his political career.

Mahathir also dismissed the videos as fake, claiming that those behind them have a political motive.