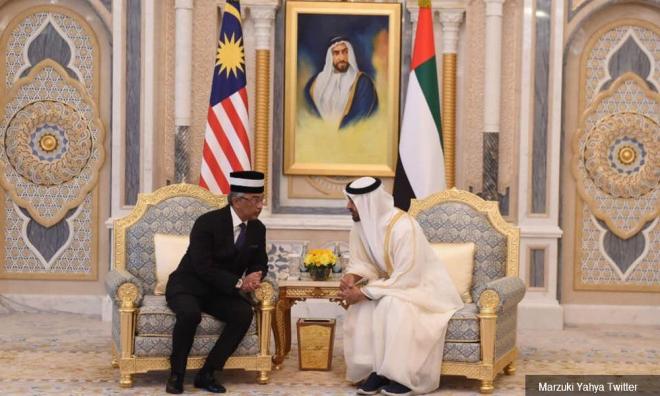 The meeting took place at the Presidential Palace in Abu Dhabi on the second day of the three-day special visit by the Malaysian monarch to this Arabian Gulf nation. Sultan Abdullah arrived in Abu Dhabi on Wednesday.

Sheikh Mohamed is a close friend of Al-Sultan Abdullah as both of them attended the Sandhurst Military College, England and their close relationship is well reflected with their meetings.

The proceedings at the palace kicked off with an official welcoming ceremony for Sultan Abdullah.

The event was marked by a ceremonial gun salute and Malaysia's national anthem 'Negaraku' being played.

In a statement in Kuala Lumpur issued prior to the visit, the Foreign Ministry said the special visit of Sultan Abdullah to the UAE symbolised the warm and close bilateral relations between the two countries.

This is Sultan Abdullah’s maiden visit to the UAE after taking the oath as Malaysia's 16th Yang di-Pertuan Agong on Jan 31.