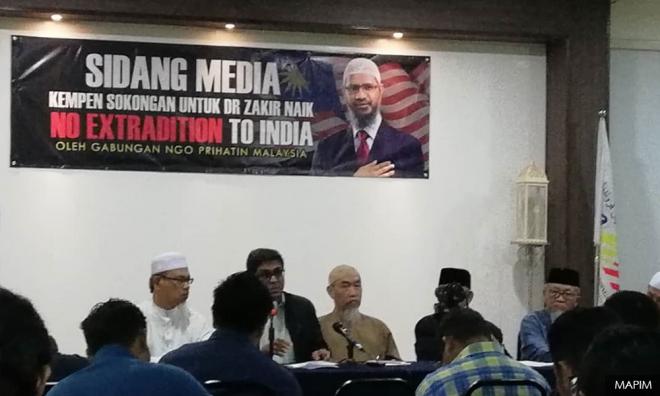 The Malaysian Islamic Consultative Council of Islamic Organisations (Mapim) and other Muslim NGOs have launched a one million signatures campaign to support Prime Minister Dr Mahathir Mohamad on the extradition of Zakir Naik.

Mapim's president Mohd Azmi Abdul Hamid said the campaign is for Mahathir not to cave in to pressure from certain quarters.

“The Malaysian government has resisted so far and not bowed to pressure from India and certain quarters in Malaysia...

“However, the political climate of late has been worrying.

“So we decided to state our stand and support the government, failing which, Islam would continue to be a tool for those deliberately stirring religious hate,” he told a press conference, according to Harian Metro.

Therefore, Mohd Azmi urged Muslims in Malaysia to unite in defence of the government's right not to extradite Zakir.

He said as a Muslim intellectual acknowledged all over the world, Zakir's lectures do not incite or belittle other religions as alleged by certain quarters.

He is also convinced that Zakir would not be accorded a fair trial in India, where he is sought for alleged money laundering.

Mohd Azmi said despite the preacher having explained the sources of the funds and financial procedures numerous times, India is still seeking his extradition.

“All documents on the flow of funds and payment of taxes have been submitted to the relevant authorities in India. There is also pressure from within Malaysia from certain social activists, media organisations and politicians for the government to expedite the extradition process.

“We are convinced many are of the view that Zakir will not receive a fair trial in India what more when the Indian government and Indian media have cast a negative perception on him,” he added.

On Monday, Mahathir said Malaysia had the right to determine if the controversial Indian-born preacher would receive a fair trial if deported.

He was commenting on a news report that India's Enforcement Directorate (ED) is set to secure an arrest warrant against Zakir and others in an ongoing trial heard by a special court in Mumbai under the Prevention of Money Laundering Act 2002.

According to the report, the Mumbai court would decide whether a non-bailable warrant of arrest should be issued against Zakir at its next hearing scheduled for June 19.

The ED would then request for an Interpol red notice against the Indian-born preacher, as well as extradition from Malaysia after obtaining a non-bailable warrant from the court.

Zakir, who has claimed that the allegations against him are false, was given Malaysian permanent resident status by the previous BN administration.