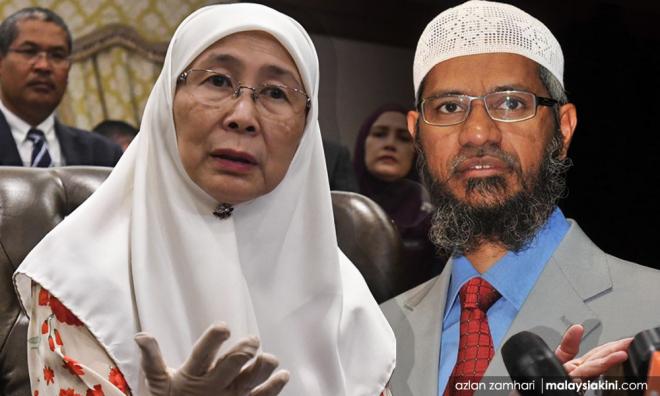 Deputy Prime Minister Dr Wan Azizah Wan Ismail said that Putrajaya is yet to receive a formal extradition request for preacher Zakir Naik, who is wanted on money laundering charges in India.

"As of now, the government has not received any application from India to extradite Zakir," she was quoted as saying by The Sun Daily during a Hari Raya open house in her constituency of Pandan.

Wan Azizah added that the government's position will be that of Prime Minister Dr Mahathir Mohamad.

Mahathir had previously likened Zakir's position to that of fugitive Sirul Azhar Umar.

However, Sirul fled to Australia, which has refused to extradite him if the death sentence is not commuted due to its policy against capital punishment.

Mahathir had said that the government wants to know that Zakir will receive a fair trial in India.

However, the prime minister had also faced criticism for supposedly not applying the same standards to other cases – including Thai activist Praphan Pipithnamporn, who was deported to her home country where she faces lèse-majesté charges.

Mahathir compared the situation to Australia refusing to allow Sirul to be repatriated back to Malaysia after he was sentenced to death in 2015 for the murder of Altantuya.

"Zakir, in general, feels that he is not going to get a fair trial in India," he had said.

Delhi had earlier requested for an Interpol Red Notice against Zakir and his extradition from Malaysia after a non-bailable warrant was issued against him.

In response, the preacher said that he was prepared to return to India on the condition that the Indian Supreme Court could assure him in writing that he would not be arrested and jailed until he was convicted.

Zakir is being charged in relation to laundering more than 1.93 billion rupees (RM115.66 million) from proceeds of crime in India and overseas.