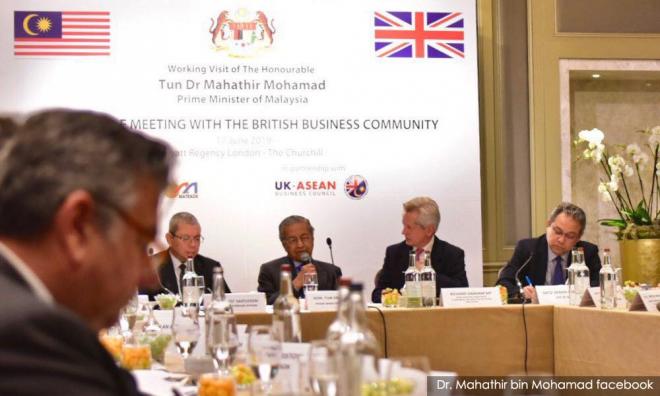 Investors in the United Kingdom (UK) are upbeat on Malaysia's economic potential and have been showing keen interest in investing in the country, said Prime Minister Dr Mahathir Mohamad.

"I have used the opportunity while here to find out what British businesses could do for us, what they want from us and what are the things that need to be looked into to draw their investment," Mahathir said on the final day of his three-day working visit to the UK.

At the roundtable meeting with the investors earlier today, he said that many have shown a keen interest in investing in Malaysia, including an aircraft designer firm, while others put forward investment proposals in certain areas.

He did not divulge the identities of the firms as they were still at the proposal stage.

The roundtable session was conducted with 50 leading businesses and institutions and organised by the Malaysian Investment Development Authority and Malaysia External Trade Development Corporation.

He said he hoped the companies that had shown keen interest would invest in Malaysia or establish joint-ventures for the benefit of the country.

May have to sell assets

Mahathir also said the government was looking into ways to make the country competitive and reduce its debts.

The prime minister said upon his return to Kuala Lumpur, he would propose to the cabinet to sell some of the government’s assets.