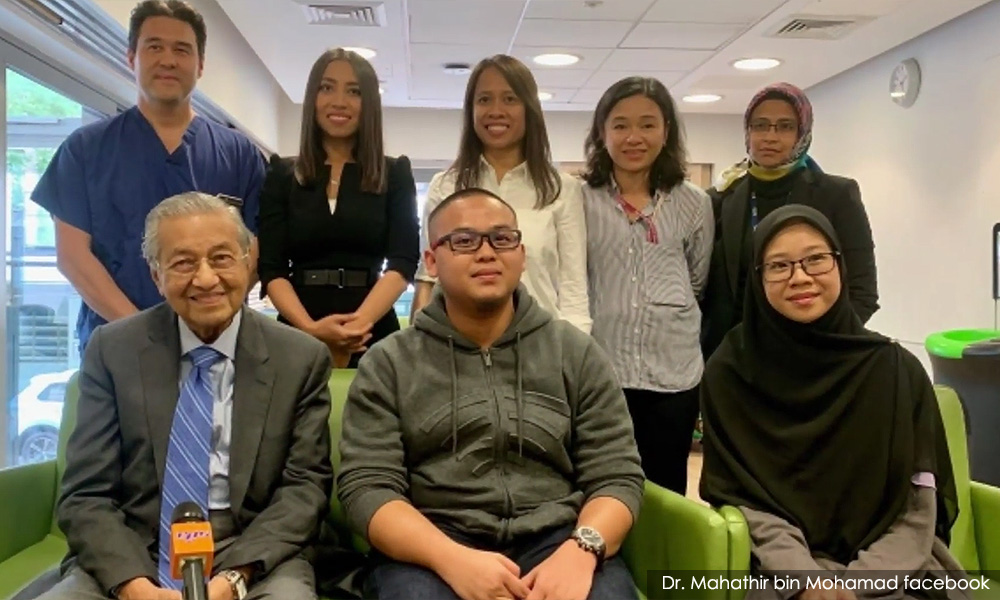 The girl’s father Ahmad Safiuddin Ahmad Razak and mother Nurul Erwani, both 24, were elated to see Mahathir coming to visit their daughter after completing the itinerary of his three-day working visit to the UK.

Ainul Mardiah has been showing good signs of progress after the surgery last Monday at a children’s hospital in London and, according to the father, she is already breathing on her own.

She was born prematurely at the seventh month of pregnancy and was diagnosed with the rare cancer after birth. Though the cancer growth was initially removed at the Kuala Lumpur General Hospital, the symptoms returned this time at her mouth.

Mahathir, when met by the Malaysian media after seeing the baby, said: ”I am touched by the infant. However, I am happy with the attitude shown by the Malaysian people that enabled Ainul Mardhiah to get the treatment here”.

Ahmad Safiuddin said despite the condition, his daughter had a zest for life like any other child of her age.

Ainul Mardhiah and her parents arrived here for the surgery at a private hospital on May 24. A team of surgeons removed the 200g tumour that covered her entire mouth during the five-hour surgery.

Her costly and intricate surgery was made possible by the generous Malaysian public and the help from UK-based, Malaysian-born trainee surgeon Dr Nur Amalina Che Bakri who sought the advice of her medical acquaintances in the UK on how the child could best be treated.

The total cost of the surgery could surpass RM1 million. The Malacca state government, the Immigration Department and Malaysia Airlines had also come forward to help.

Health
UK
Related Reports
150 Orang Asli leave Sg Berua settlement after arrivals from Kuala Koh
a year ago
'I lost my husband, three children in two weeks'
a year ago
Parents of four among school cleaners fired after ‘new contracts’ enforced
a year ago
Thai police detain captain, crew of boat carrying Rohingya
a year ago