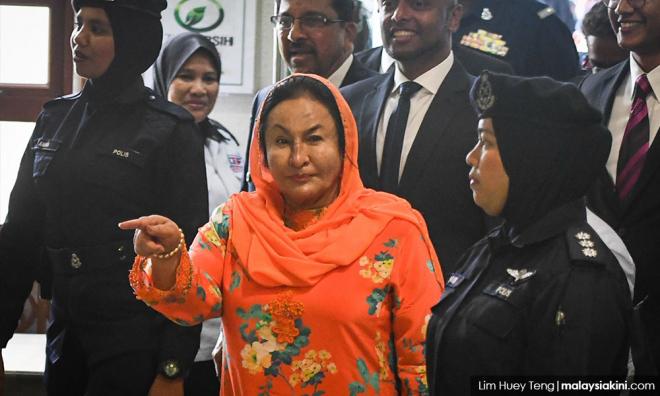 The corruption trial of Rosmah Mansor, wife of former prime minister Najib Abdul Razak, over the Sarawak solar project cases will be heard in the High Court.

This follows Rosmah’s decision to withdraw her appeal today in the Court of Appeal against the High Court decision made in Kuala Lumpur on March 15 this year, allowing the prosecution to transfer her case from the Sessions Court to the High Court.

Rosmah's counsel Jagjit Singh informed a three-member bench led by Justice Abdul Rahman Sebli that the defence is withdrawing the appeal in the light of a High Court decision of May 30.

On that date, High Court judge Mohamed Zaini Mazlan allowed a prosecution application to jointly try Rosmah and Rizal Mansor, a former special officer to Najib, at the High Court pertaining to their corruption charges over the solar project and set 32 days for trial beginning Feb 3 next year.

Justice Mohamed Zaini had also ordered for Rosmah’s money-laundering charges, involving more than RM7 million, to be heard separately and fixed May 11 for the trial.

Today, DPP Mohd Farizul Hassan Bakri did not object to the withdrawal of the appeal.

Justice Abdul Rahman, who sat with Justices Kamardin Hashim and Harmindar Singh Dhaliwal, then struck off the appeal.

Rosmah, 67, was not present in court today.

She pleaded not guilty in the Sessions Court on Nov 15 last year to two counts of soliciting RM187.5 million and receiving RM1.5 million for projects to provide solar energy to 369 rural schools in Sarawak.

Rizal, 46, claimed trial on that same day to four counts of soliciting and accepting bribes for himself and Rosmah, amounting to RM5.5 million, over the same project.

On Oct 4 last year, Rosmah also pleaded not guilty to 12 charges of money laundering amounting to RM7,097,750, and five charges of failing to declare her income to the Inland Revenue Board.