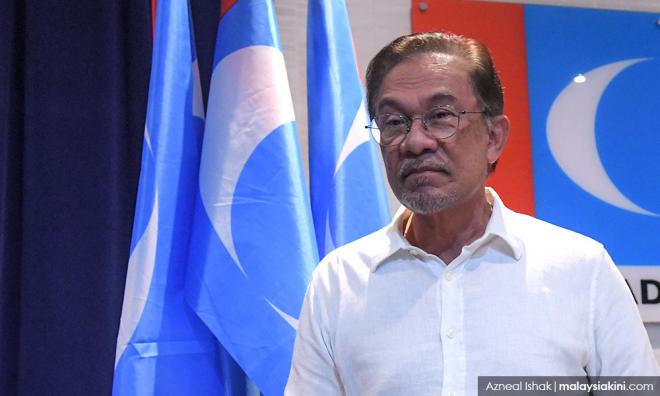 I agree with Mahathir, no need to switch DPM - Anwar

Anwar Ibrahim said he agrees with Prime Minister Dr Mahathir Mohamad that there is no need for the PKR president to replace his wife as deputy prime minister.

This comes after Bersatu's Jeram assemblyperson Mohd Shaid Rosli proposed that Dr Wan Azizah Wan Ismail step down as deputy prime minister so as to allow her husband Anwar to take her place.

Anwar said this was discussed during a brief meeting with Mahathir today before the prime minister departed for a government trip to Bangkok.

"In the meeting, I stated my agreement with his position to focus on programmes to develop the country and that there was no need to change the deputy prime minister and cabinet," he said in a Facebook post.

"We also discussed the obscene video where I reiterated my position that PKR rejects the culture of dirty and disgusting politics and expressed sympathy to Azmin and his family.

"I also reiterated that there are political elements in this issue and it is not appropriate to slander anyone of spreading the video without basis," he said.

Earlier today, Mahathir was asked about the proposal for Anwar to take Wan Azizah's place as deputy prime minister.

"He has a right to propose (that Wan Azizah step down). They can make a proposal but whether I accept it is a different matter," he replied.

Wan Azizah: No need for Harapan, PKR will resolve sex video scandal
20 Jun 2019
PM rules out need for Azmin to go on leave pending probe
20 Jun 2019
Kelantan thanks DPM for ruling out pollution as cause of death
18 Jun 2019
DPM not stepping down to make way for Anwar
18 Jun 2019