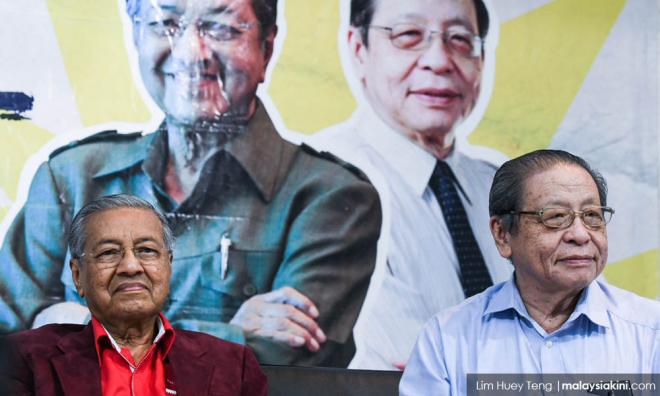 Sinister conspirators and cybertroopers are working overtime to churn out lies and falsehoods, according to Lim Kit Siang.

Among them, he said, is that a motion of no confidence would be moved against Prime Minister Dr Mahathir Mohamad during the next Parliament meeting from July 1-18.

“As next month will prove, this motion of no confidence against Mahathir is only the creation of the fevered imagination of sinister conspirators and cybertroopers,” he added in a statement this afternoon.

Although the DAP veteran did not mention names, it is believed that he was responding to blogger Raja Petra Kamaruddin, who claimed that Anwar Ibrahim had the numbers to oust Mahathir.

Quoting sources from Anwar's camp, the blogger said the PKR president has the support of at least 37 of the MPs from Sabah and Sarawak and another 103 from Peninsular Malaysia whereas Mahathir has only 40 seats in total with 42 abstentions.

“Parliament will be sitting soon and if Anwar does not make his move, then that would mean he is never going to be the next prime minister.

“Mahathir has about two weeks to decide what he is going to do unless he wishes to throw in the towel and call it a day. As it stands now, unless Mahathir has a golden bullet hidden up his sleeve, it is more or less a foregone conclusion that Anwar will be celebrating Christmas in Seri Perdana… finally,” he had added.

'Worst week for Harapan since GE14'

Meanwhile, Lim noted the absence of any positive news in the past week, which has been dominated by a sex scandal, implicating Economic Affairs Minister Mohamed Azmin Ali.

“It's not all doom and gloom in undoubtedly the worst week of the Pakatan Harapan government since the historic decision of the 14th general election on May 9, 2018,” he added.

One positive news in the past week, Lim pointed out, was Universiti Malaya (UM) making a giant leap up the Quacquarelli Symonds (QS) World University Rankings 2020.

UM is now ranked 70, climbing 17 spots from last year's ranking. This is the university's highest position since the rankings began in 2004.

On the same, Lim conceded that rankings are not the be-all and end-all for universities.

“There is no pride in being a highly-ranked university if the graduates lack integrity and integrity problems, like plagiarism, are rife and rampant.

"Undoubtedly, more important than rankings is the ability to produce graduates who are good citizens, who care about national unity, environment, being considerate to others and transforming Malaysia into a world top-class nation,” he added.