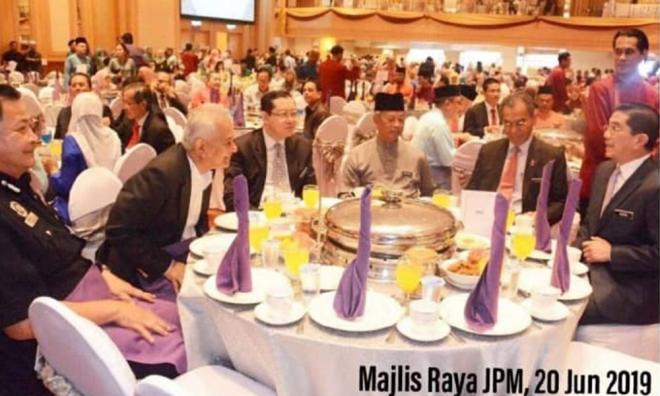 Reformasi veterans focus on photo of Azmin at same table with IGP, AG

Otai Reformis (reformasi veterans) are using a photograph from a Hari Raya open house to justify their call on Economic Affairs Minister Azmin Ali to go on leave pending police investigations into an alleged sex scandal.

The photograph showed Azmin seated at the same table with Inspector-General of Police Abdul Hamid Bador and Attorney-General Tommy Thomas during the function at the Prime Minister's Office in Putrajaya yesterday.

“This is why Otai Reformis urged Azmin to take leave from official duties.

“How can justice be served when he is seen eating and drinking at the same table with the AG and IGP at a Hari Raya function when he is still under investigation?” asked the group's secretary Abdul Razak Ismail in a statement this afternoon.

Umno secretary-general Annuar Musa also commented on the photograph, which is circulating on social media.

“Fortunately, the person who will sentence did not join as well...,” he tweeted.

For the record, the police are not investigating Azmin while Prime Minister Dr Mahathir Mohamad has ruled out the need for him to go on leave.

Police are investigating the authenticity of the sex clips as well as Santubong PKR Youth chief Haziq Abdullah Abdul Aziz.

Haziq is being investigated under multiple sections, including for carnal intercourse.

After the first clips were released, Haziq had claimed that he was the person in the videos while the other individual was Azmin.

Azmin has described the videos as a nefarious attempt to ruin his political career.