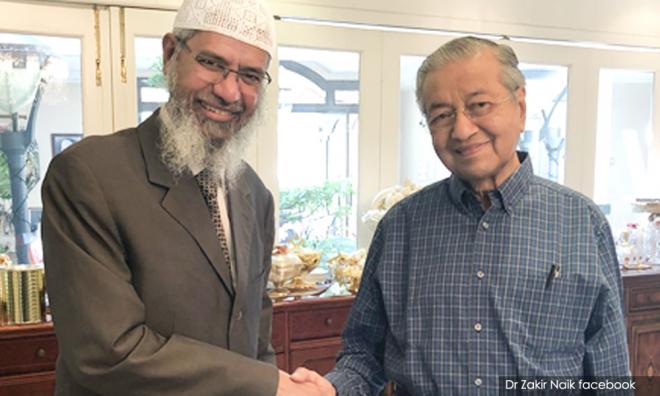 YOURSAY | 'Send the preacher home and allow him to clear his name in India.'

Zakir Naik will return if Supreme Court promises not to arrest, jail him

A warrant of arrest means exactly that, it is to facilitate an arrest formally and legally. The arrest warrant was issued due to Zakir’s failure to attend his court hearings.

Malaysia cannot expect a country like India to forgo the rule of law and set aside the warrant of arrest for one man simply because he refuses to attend his own hearing. That will set a dangerous precedent. Imagine if that happened in Malaysia – if no one bothers attending their court hearings anymore?

Zakir is evidently a very wealthy man. He has the means to hire the best lawyers. At most, he will be arrested for a night before the court allows him bail. It’s simply a matter of filing for bail. Surely his lawyers will know how to file for bail.

Not only most Muslims in India, but most Muslims all around the world will be watching the Zakir trial closely, should it happen.

Regardless of how we feel about this, we cannot allow Malaysia to disregard the rule of law of another country when we ourselves put so much of emphasis on the rule of law here.

We want murder convict Sirul Azhar Umar back, and we are upset that Australia isn’t honouring the extradition request. India is also upset with Malaysia for not sending Zakir back.

We want fugitive businessperson Low Taek Jho back, but we appear to not know of his whereabouts. India knows exactly where Zakir is, so do we, and India has requested that he be sent home, formally or informally.

Several red notice requests have been sent to the Interpol for Zakir’s arrest. Send the preacher home and allow him to clear his name in India.

Zakir can always return to Malaysia, with his head held high, cleared of all charges, once that’s been sorted out.

Just Wondering: Indeed, why should the Indian Supreme Court give Zakir any guarantees?

You go before the Supreme Court and plead your case, not the other way around. You are only a permanent resident here and a citizen of India. Go back and face the court of your motherland.

Roger 5201: So Sirul will return to Malaysia if the court promises in writing not to impose any death sentence on him, and the police not arrest him but gives him 24/7 protection.

All these prejudicial conditions make a mockery of the rule of law, and monkeys of our judiciary.

Anonymous_4031c: I didn't know one can dictate terms to be tried. The law treats everyone equally.

Malaysia is making a big mistake in applying double standards in the rule of law. We have no good reasons to keep someone like Zakir as a worthy person to the country.

Norman Fernandez: Zakir should know that in India, unlike Malaysia, you can apply to the courts for what is known as ‘anticipatory bail’, which, if granted, will prevent remand upon arrest.

Vijay47: Dear Zakir, I have carefully studied your “Conditions for Repatriation” and unlike the nasty people here in Malaysiakini, I find your gentle, humble requests (not demands), most reasonable.

No one can find fault with you as you have addressed your plea to an Indian forum, the Supreme Court.

It is not as though you wrote to US President Donald Trump, the United Nations, or Queen Elizabeth II especially since the British Raj ended on Aug 15, 1947, when Jawaharlal Nehru led India to its tryst with destiny as the world slept.

The guarantee that you be not arrested or jailed is not all that impossible to proffer since it only requires the Indian Constitution to be amended – an achievement well within the means of the BJP, even though it is generally considered a Hindu party.

On that score, I am sure that Indian Prime Minister Narendra Modi and Home Minister Amit Shah will welcome your explanation whether this protection from arrest applies to you only or to all Muslim accused, assorted criminals, and members of the Dawood Ibrahim gang.

By the by, as they say in Karol Bagh, I note that you stated “until I am convicted.” A small prophetic Freudian slip perhaps? The correct wording should have been “unless I am convicted”. But who’s counting!

Leaving all that aside, I admire you’re not making additional requests like asking that Jammu and Kashmir be declared provinces of Pakistan before you, like Douglas MacArthur, “will return”.

For my part, I would pray that you also ask for your disciple, Muhammad Zamri Vinoth Kalimuthu, to be allowed to accompany you – that would be the icing on the alu gobi. Jai Hind (Long live India).

He should go back and stand trial, just like former prime minister Najib Abdul Razak has to stand trial here. And Low too.

Tenfold: Zakir won't be sent back. He is a bosom buddy of Mahathir.

If you thought and hoped for the 14th general election to bring about a New Malaysia, think again. Mahathir won't change.

He is still the same corrupted mind that authored the Malay Dilemma and late Tunku Abdul Rahman (bless his soul) predicted that Mahathir will be the cause of chaos in Malaysia.

Gerard Lourdesamy: Since Zakir has asked not to be arrested and jailed until his trial, the Indian government should place him under preventive detention for his own safety. That would not amount to an arrest and jail.

If Mahathir refuses to extradite Zakir even after the Indian warrant of arrest is issued on July 31 by the Special Court and the Interpol red notice is obtained, I would advise New Delhi to give Low permanent resident status in India and refuse to extradite him to Malaysia.

Low can enjoy the high life in Mumbai with India's rich and famous.

After that, just stop importing palm oil from Malaysia, impose a 100 percent tariff on our exports to India, and lastly, terminate all the huge infrastructure projects awarded to Malaysian companies including GLCs in India.

Mahathir can then become the mouse that roars before our economy collapses and Felda goes bankrupt.