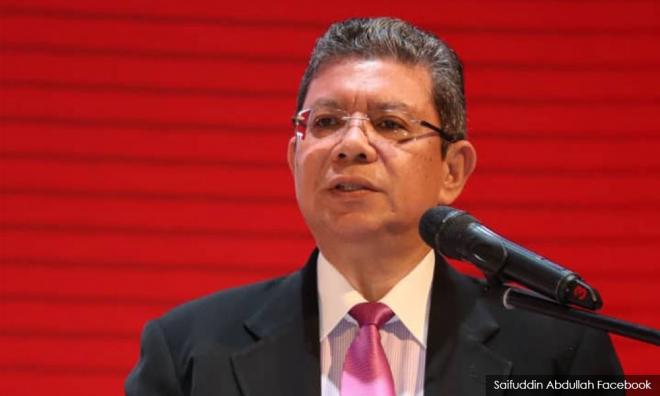 Malaysia has urged Asean member countries to come together in drafting a code of conduct (COC) so that the South China Sea dispute can be resolved amicably, according to Foreign Minister Saifuddin Abdullah.

He said Malaysia’s stand on the dispute is that it should not be discussed separately among member countries that have made overlapping claims over the area.

The discussion on the setting up of the COC at the 34th Asean summit in Bangkok should be done by member states collectively with China, he said.

"COC, which will be debated by the year-end, must be done by Asean as a group.

"We will stress this matter as there have been attempts by one or two of the Asean member countries to discuss it individually," he told the Malaysian media after attending the Asean Foreign Ministers’ Meeting (AMM) yesterday.

A COC, Saifuddin said, is seen to be more effective in ensuring peace in the disputed area compared to the Declaration on the Conduct (DOC) of Parties in the South China Sea.

Meanwhile, Saifuddin said Prime Minister Dr Mahathir Mohamad will be attending the summit’s opening ceremony today, followed by a retreat session where he is expected to raise issue of Myanmar's Rohingya refugees.

Mahathir is also expected to raise Asean economic issues in an effort to boost intra-regional trade that currently stands at less than 25 percent of the bloc's total trade.

“The prime minister is also expected to make one or two suggestions on how the Asean economy can be strengthened by taking into account its population of more than 600 million, as well as to enhance close cooperation that will benefit member countries,” he said.

Saifuddin Abdullah
Asean
Asean summit
China
South China Sea
Related Reports
Asean leaders open two-day summit in Bangkok
a year ago
Time for Asean to recognise Rohingya as an ethnic group
a year ago
Advancing the EU-Asean partnership for sustainability
a year ago
Dr M calls for M'sia, Asean to be vigilant against 'big power involvement'
a year ago