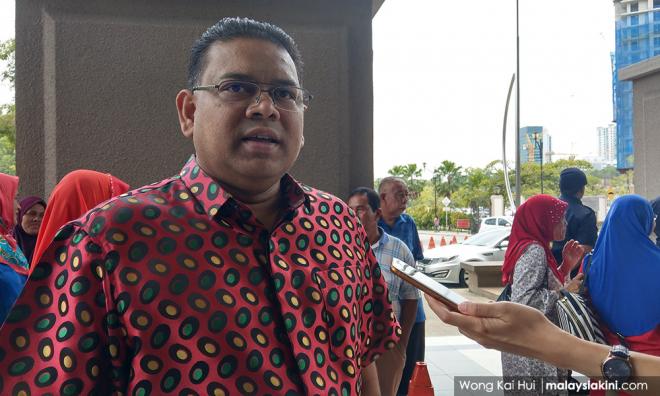 Umno supreme council leader Lokman Noor Adam said he is willing to undergo a lie detector test to prove that he had no involvement in the creation of a sex video implicating PKR deputy president Azmin Ali.

"I would like to state my readiness to undergo a polygraph test to prove that I am only a recipient of the video through a Whatsapp group called 'Jemputan Raya Azmin' (Azmin's Raya invitation) at 1.19am on June 11," he said.

Lokman said he read about the proposal on a news portal and thought it was a good idea.

"I was not involved in entrapping Azmin, fixing the cameras nor do I know about any efforts to produce the video," he said in a statement today.

Lokman was among the earliest leader to issue a press statement and lodge a police report over the video.

His swift action had prompted Pelabuhan Klang assemblyperson Azmizam Zaman Huri to question whether the Umno leader had any role in the sex video.

"Looking at Lokman's swift response, it is a well-prepared script. It was really fast, does he not sleep? The video came in at 1am (on May 11).

"I am intrigued by Lokman's response," the PKR lawmaker had said.

Lokman had defended his statement which was issued at around 10am the same day.

"How can I sleep, when the man in the video is said to be Mahathir's choice as the prime minister to replace him?" Lokman had rebutted.

In the wee hours of June 11, a series of sex videos featuring two men getting intimate were sent to journalists and PKR members.

The following day, Santubong PKR Youth chief Haziq Abdullah Abdul Aziz (above) claimed he was one of the two men in the video.

He also implicated Azmin as being his partner in the video.

Azmin had denied the allegation, stating that it was character assassination intended to end his political career.

Lokman, in his statement today, also challenged both Azmin and Haziq to undergo a polygraph test.

Likewise, he said PKR president Anwar Ibrahim too should undergo a polygraph test to prove that he is a worthy candidate to become prime minister.