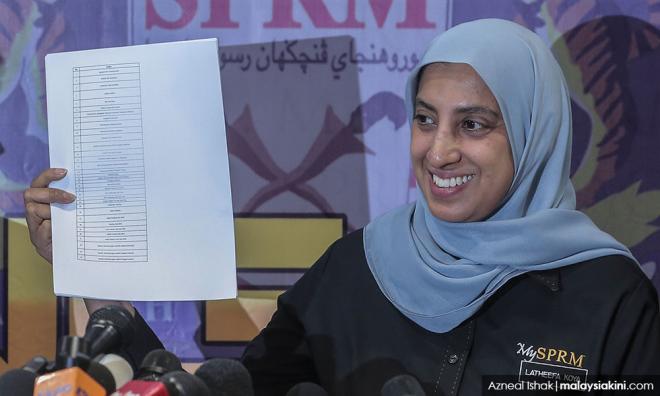 Yoursay: Latheefa, ensure we recover every sen of the stolen money

YOURSAY | ‘Make sure all the corrupt individuals and companies are punished, and all their assets seized.’

But do these individuals and organisations still have the money in their accounts? If they don’t, there will be a long process to recover the money, and attempts to do so may even be futile.

However, it is good to expose them and let the rakyat know what happened.

Fellow Malaysian: MACC chief Latheefa Koya, a great start indeed. Alleged beneficiaries of tainted funds laundered from 1MDB such as MCA, Gerakan (while they were part of BN) and MIC, et cetera, must also be similarly charged.

Otherwise, how would the government be able to recoup the funds that these beneficiaries dishonestly received or gained?

Mohd Isnin: Well done, Latheefa. At last, we see things moving. The clean-up has to be fast, as what was promised by Pakatan Harapan. Nothing more and nothing less.

Kangkung: It's a day of reckoning. Many of us are happy to hear this news, but it will be a short-lived joy as it won't be easy for MACC to recover the money. And all of it would be gone by now.

Mission Accomplished: Latheefa is making a tremendous start in curbing corruption and bringing all corrupted rogues to face the law. Let us not kill the goose that lays the golden eggs by our impatience in making unreasonable demands.

Catch the monkeys slowly. The net is not big enough to catch all the crooks in one go. Patience and determination will bring fruition to her serious endeavours and our great desire.

Tidak Harapan: Yes, go for the money first. Prosecution can come later, and let those secondary crooks think about it and sweat it out for a while.

That's what the DOJ has been doing in respect of 1MDB funds that had been laundered away.

Don’t Just Talk: New MACC chief Latheefa Koya is someone who goes straight to work. Prime Minister Dr Mahathir Mohamad has chosen someone who can be relied upon to lead and to act without fear or favour.

It was a good choice to appoint Latheefa to head the MACC.

Wsoi: All who took our money must return it. Set a strong deterrent for future leaders, which tells them: “Don't abuse your power or you will be in jail." Set it right, dear Latheefa, for the country.

Vgeorgemy: Umno must account for the nation’s wealth which was allegedly plundered during their regime.

Assets must be sold if the monies have been misused, for it is the wealth of the nation that must be returned.

Anonymous_85ea2381: We rakyat simply cannot describe our joy. Everyone I talked to feels so happy, so much so that we want to cry.

Latheefa, thank you for your swift and courageous action, and MACC team, thank you. Keep it up.

We have suddenly become so alive after reading the news.

Malaysian Malaysian: Very sound decision. I hope the monies are recovered soonest and put back into the nation's coffers for the use of the rakyat and nation. Kudos, MACC.

TC Chan: If these recipients have any morals, they should just give back the money.

The money belongs to the country and is not Najib’s for the giving. But I suspect they would shamelessly fight to retain the money.

For a change, let them have sleepless nights and make them defend their actions.

Anonymous 2327531438397239: Congratulations MACC, this is the way to go to make sure all the corrupt individuals and companies are punished, and all their assets seized.

All those political crooks should be brought to justice, and don’t forget a whole lot of government-linked companies, government departments and civil servants who are living beyond their means.

It’s time to examine them with a fine-toothed comb, especially the number of houses, cars, shares, et cetera, they own vis-à-vis their pay.

FairMind: The task force should not be restricted to recovering 1MDB-linked assets. There are many instances of warlords laundering their ill-gotten gains in the past, for example, in scandals involving Felda, Tabung Haji, Mara, et cetera.

Collectively, the money may even surpass that of 1MDB-linked assets. We would understand if you wish to concentrate on 1MDB-linked assets right now. However, in future, the task force should extend to other cases as well.

Specialist Batsman: Great job, MACC. This is exactly one of the reasons why millions of Malaysians voted to send the corrupt Umno/BN regime to the political wilderness on May 9 last year.

However, when are Malaysians going to see a task force by MACC to recover the massive wealth stolen by the former Sarawak chief minister during his 32-year tenure as chief minister and finance minister of Sarawak?

Anonymous 1689721435778173: We will need other countries' help in this. Mahathir better polishes up his public relations skills and stop going around offending everyone with his racist remarks.

Vent: "Coming soon" only? In any case, we Malaysians are a patient lot. We waited long enough to be rewarded with the breaking news that MACC is going after the funds stolen locally, and now this, and all on the same day?

What could be more uplifting for the Malaysian soul, especially after being battered by the stink emanating from the PKR dumpster yet again? The wind of hope is lapping against us again.