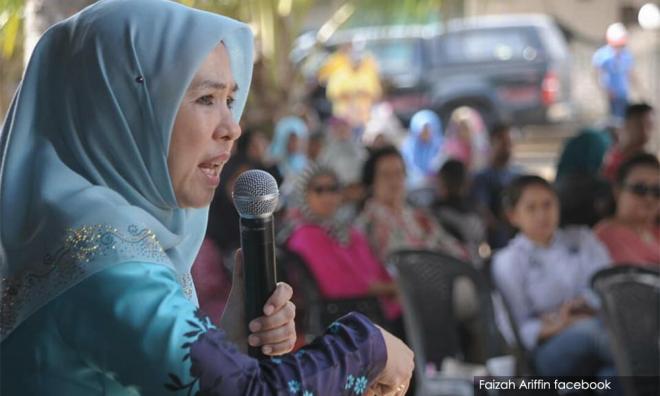 A PKR leader has called for party vice-president Zuraida Kamaruddin to be disciplined over her remarks on the sex videos allegedly implicating deputy president Azmin Ali.

PKR women vice-chief Faizah Ariffin said Zuraida's comments were not in line with the party's decisions on the matter.

This is after Zuraida said Santubong Youth chief, Haziq Abdullah Abdul Aziz, would have been sacked from PKR if she weres the party president, but had conceded to the party's wishes to follow due process.

Haziq had made a confession that the sex videos were of him and Azmin.

PKR subsequently issued a show-cause letter against the 27-year-old, a move that was approved by the political bureau by consensus.

Zuraida (below) was present during the political bureau meeting last week, and sources said she had agreed to the decision made.

Hence, Faizah questioned why the PKR vice-president was not toeing the line.

"Why is she so rude that she doesn't want to adhere to the consensus which she was involved in making? Does she feel so big-headed now?

"This can't be left alone and disciplinary action must be taken. Her actions clearly disrespected her party.

"It is time she packs up and leaves the party," Faizah said in a statement today.

She added in the case of the sex videos, whomever Haziq's alleged partner was will be revealed by either God or the authorities.

Haziq has 14 days to respond to PKR's show cause letter dated June 16.

Azmin has denied the allegations against him as libel meant to destroy his political career.

The matter is still under police investigation.

PKR
sex videos
Zuraida Kamaruddin
Faizah Arifiin
Related Reports
Syukri ticks off Zuraida on suggestion to fire Haziq
a year ago
I would have fired Haziq if I were PKR president, says Zuraida
a year ago
Zuraida won't stand in the way of ex-aide's 'critique' of gov't
a year ago
Unnatural sex a crime, Zuraida to demand Haziq's sacking at PKR meet
a year ago