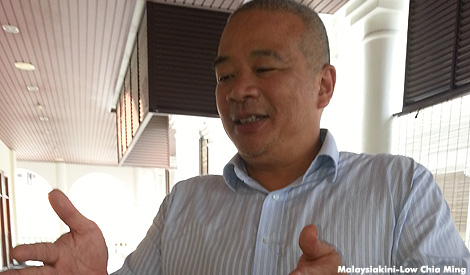 A local Penang NGO - Citizens Awareness Chant Group (Chant) - has called on the Attorney-General’s Chambers to push for deterrent sentences for those responsible for landslides that caused deaths.

"We hope that all the money spent is not wasted to ensure safety for the rakyat. We urge the Attorney-General’s Chambers to push for a deterrent sentence for those responsible. Throw them in jail for one day. Good enough," Chant adviser Yan Lee (photo, above) said today.

Yan Lee has also questioned why the Penang Island City Council (MBPP) could claim no responsibility for the latest landslide in Tanjung Bungah, which fatally buried four Myanmar nationals on the night of June 24.

He said MBPP had claimed the owner of the Lost Paradise Resort hotel had not obtained permission to erect the retaining wall that collapsed on that fateful night.

Yan Lee said MBPP has enforcement people carrying out surveillance and monitoring of such "illegal" construction activities around Penang.

"In the spirit of New Malaysia and CAT (the state government's Competency, Accountability and Transparency principle), show your records and diary (that you have monitored the site)," he told MBPP.

"Share your SOP (standard operating procedures) and tell us how you check for illegal works and how many enforcement officers you have, including the number of enforcement personnel and their daily duties. Please share with the public," he added in a statement.

Is the MBPP being negligent?

Yan Lee asked MBPP if it was aware of its own inability and whether it has enough workforce to police and ensure safety in Penang.

"Are you being negligent in allowing and approving more development projects?" he asked.

Following the tragic incident, Chief Minister Chow Kon Yeow urged the police and relevant authorities to probe the incident thoroughly so that action could be taken against the wrongdoers responsible for the landslide and the death of four foreign workers.

MBPP mayor Yew Tung Seang also vowed to use the existing laws to act on those responsible for the landslide, saying all landowners must obtain approval from the council before commencing construction work, even though it is done on their private land.

Yan Lee also expressed shock to hear that MBPP had no idea of two smaller landslides that occurred in Tanjung Bungah earlier, and claimed only to know about the latest incident.

"We also know that in the Penang Structure Plan 2030, there is a lacuna, which allows development above 250 feet.

"We need the State Committee of Inquiry on the deadly landslide in Tanjung Bungah, which claimed 11 lives on Oct 21, 2017, to make public its findings," Yan Lee said.

"The State Commission of Inquiry consists of at least six experts in the engineering field. A lot of money has been spent to bring this group together," he added.

Penang Island City Council
landslide
NGO Chant
four deaths
Related Reports
Yoursay: Too many lives lost on 'island of landslides'
a year ago
Penang gov't appears 'immune' to landslides, says PSM
a year ago
All bodies from Tanjung Bungah landslide recovered
a year ago
Penang CM calls for action against those behind recent landslide
a year ago