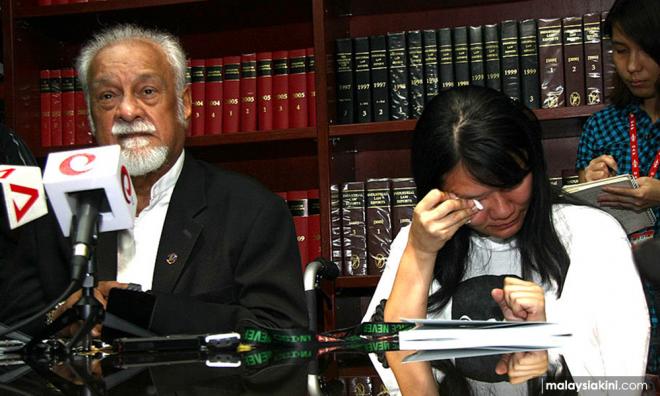 If only Karpal were still alive - Beng Hock's sister

Lee Lan said if Karpal, who perished in a car accident in 2014, were still around, the scenario would be different.

"If you are still alive, this... would be another scenario. I miss you, Mr Karpal Singh. You are always on my mind," she posted on Facebook last night.

She also published a photograph of her with Karpal.

Prior to his death, Karpal had represented Beng Hock's family. His son, Ramkarpal Singh, is now acting for them.

Beng Hock had died in 2009 when being held overnight for questioning at the then Selangor MACC headquarters in Shah Alam.

The police are now investigating the matter under Section 342 of the Penal Code for wrongful confinement, and not culpable homicide.

Yesterday, Deputy Inspector-General of Police Mazlan Mansor said the police are just following orders from the Attorney-General's Chambers, while Home Minister Muhyiddin Yassin also said he was leaving the matter to the AGC.

In a separate Facebook posting, Lee Lan said if the police had made such a remark during BN's administration, the then opposition would have been up in arms.

However, she lamented the silence of these once vociferous politicians in New Malaysia.

Lee Lan also said the government should not use the civil suit as an excuse to stop looking into the criminal elements surrounding her brother's death.

Yesterday, Muhyiddin said all legal process have been followed with regard to the case in the past, including forming a royal commission of inquiry and payment of compensation to Teoh's family.

“Is (this promise) as worthless as the promises made by the former prime minister (Najib Abdul Razak)?” she added.

In 2014, the Court of Appeal ruled that one or more unknown persons, including MACC officers, had caused the death of Teoh when he was in their custody.

The Attorney-General's Chambers has yet to respond to Malaysiakini's request for a response.