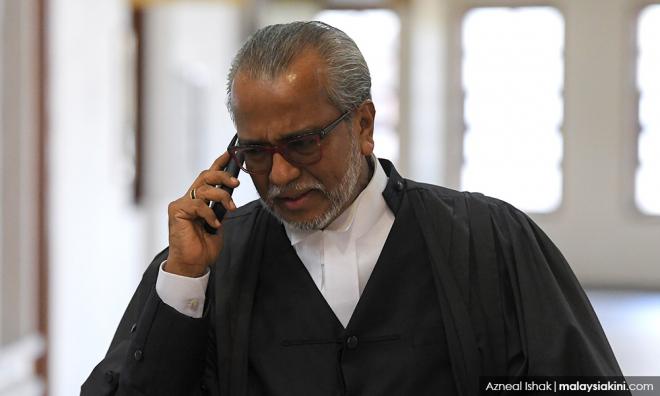 The trial of prominent lawyer Muhammad Shafee Abdullah (above), who is facing two counts of money laundering charges involving RM9.5 million he allegedly received from former prime minister Najib Tun Razak, and two charges of making false statements to the Inland Revenue Board (IRB), has been moved to March next year.

High Court Judge, Collin Lawrence Sequerah fixed the date after counsel, Farhan Read, representing Muhammad Shafee, had requested the earlier fixed trial dates on July 8 to 11 and July 15 to 18 to be vacated to give way for Najib’s on-going SRC trial to be completed first.

Farhan informed the court that the SRC trial, in which Muhammad Shafee is defence lead counsel, will continue on July 1 and the dates fixed for July clashed with Muhammad Shafee’s own trial dates.

“The SRC trial at the moment is prioritised, and we ask for the dates in July to be vacated,” he said.

On Sept 13 last year, Muhammad Shafee, 66, pleaded not guilty to receiving proceeds from unlawful activity via cheques issued by Najib, which were remitted into Shafee’s CIMB Bank Berhad account.

The charges, under Section 4(1)(a) of the Anti-Money Laundering and Anti-Terrorism Financing and Proceeds of Unlawful Activities Act 2001, carry a fine not exceeding RM5 million or up to five years’ jail or both upon conviction.

Muhammad Shafee is also facing two charges of being involved in transactions of proceeds from unlawful activity, that is by making inaccurate statements and in contravention of paragraph 113(1)(a) of the Income Tax Act 1967 for financial years ending Dec 31, 2013 and Dec 31, 2014.

For this, Muhammad Shafee is liable to be jailed a maximum 15 years and fined not less than five times the amount of proceeds from the unlawful activity.