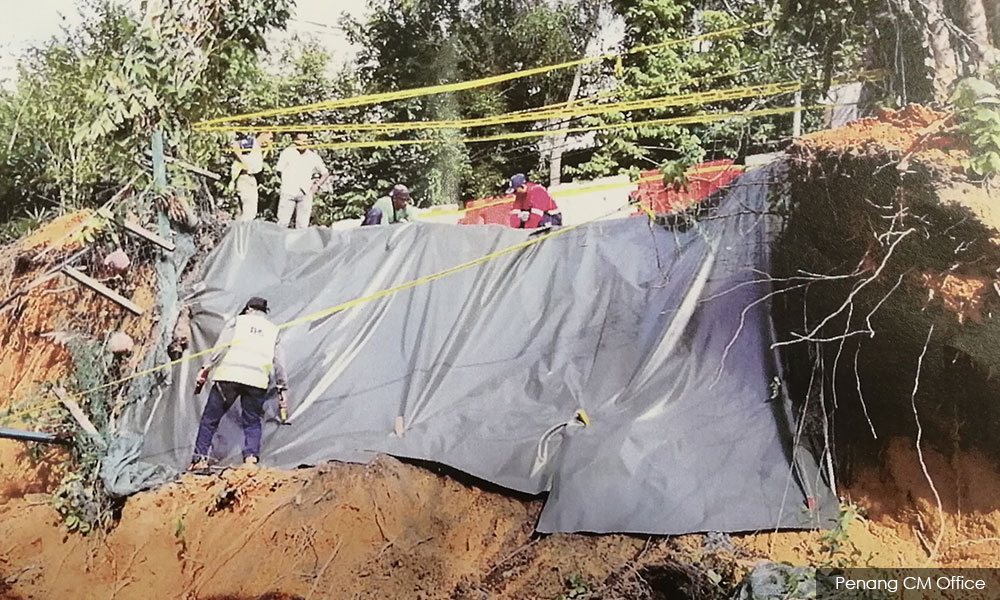 Penang Forum, a vocal coalition of local NGOs concerned with the environment, says the several landslide incidents in the state raises the question of the fragility of slopes around the island.

In a press statement today, the NGO warned that extreme caution needs to be taken when dealing with such hillslope development.

The NGO noted that the land works done at the site of the latest landslide in Tanjung Bungah are illegal as the landowner did not obtain the proper permit.

Although the Penang Island City Council (MBPP) has a team to monitor illegal construction work, the activity in the latest incident was on a slope below the road and hidden, thus unnoticeable.

"This would mean that in spite of the fact that MBPP has a team to detect such illegal construction work, the council was unable to detect it as a result of its obscure location," said Penang Forum.

"This forces us to ask: how many more illegal construction works are in progress on slopes around the state and does the MBPP have sufficient monitoring and enforcement capacity to detect them and act on them?"

Penang Forum was referring to the tragic loss of lives of four Myanmar nationals in the June 25 landslide at Lost Paradise Resort, Tanjung Bungah.

Chief Minister Chow Kon Yeow has urged the relevant authorities, including the police, to probe the matter swiftly and take action against the culprits.

Penang Forum pointed out that in a span of less than two years, the island has seen two earlier deadly landslide incidents - the Oct 21, 2017 Granito landslide and the Bukit Kukus landslide on Oct 19 last year.

A total of 24 lives were lost as a result of the three tragedies.

"This latest landslide again highlights the need for more public awareness about slope safety and the need for landowners to know their responsibilities in maintaining slopes as well as alerting the authorities when tell-tale signs of slope instability and erosion appear," said Penang Forum.

The slope where the latest incident occurred is located at the brink of the main road leading from Tanjung Bungah to Batu Ferringhi, which is under the jurisdiction of the Public Works Department.

PWD has found that it was the construction work that resulted in the slope giving way and causing the landslide.

"In the aftermath of this landslide, it is imperative that the Penang government make it clear to landowners about the responsibilities they have as slope owners and the right channels to approach to report cases of erosion and slope instability," the NGO said.

It urged the state to launch a thorough investigation into the June 25 incident and to identify those who might be charged with negligence.

"We urge the authorities to impose the maximum penalties as a deterrent to prevent such needless loss of lives," the NGO added.

"There is a need for more comprehensive monitoring and enforcement, especially in identifying such cases of illegal construction on slopes."

Penang Forum said tougher laws and penalties are needed to punish errant landowners who flout the laws so that such incidents are never repeated.

It added this latest incident exposes the dangers of development on slopes, especially when they are cut legally or illegally.

"We call upon the state to review its policies, guidelines and standard operating procedures in relation to hillside development.

"A moratorium on all slope developments and highway projects over the hills should be imposed, until such a time when the state has a done a comprehensive check on all hillslopes, taken remedial actions, and complete hillslope rehabilitation," urged Penang Forum.