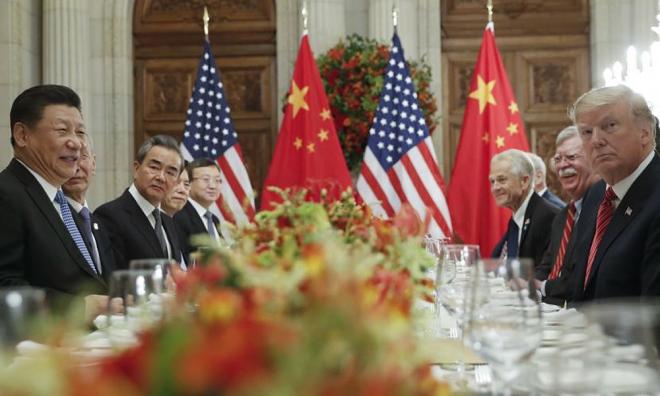 The United States and China have agreed to restart trade talks and Washington will not level new tariffs on Chinese exports, Beijing's official Xinhua news agency said on Saturday, as US President Donald Trump said the talks were “back on track.”

Saturday’s high-stakes meeting between Trump and Chinese President Xi Jinping was being closely watched in hopes that it would ease tension rather than plunge the world’s two biggest economies into a deeper trade war.

The dispute has already cost companies in both countries billions of dollars, disrupted global manufacturing and supply lines, and roiled markets.

“The US side said it would not add new tariffs on Chinese exports,” Xinhua said in a brief report, adding that negotiators of both countries would discuss specific issues, but gave no details.

Trump told reporters he had an excellent meeting with the Chinese leader and that talks were “back on track.” The two met in Osaka, on the sidelines of a summit of leaders of Group of 20 (G20) developed economies.

“We had a very good meeting with President Xi of China, excellent, I would say excellent, as good as it was going to be,” Trump said. “We discussed a lot of things and we’re right back on track and we’ll see what happens.”

Ahead of the talks, Trump had said a fair trade deal would be “historic,” but gave no details.

The trade dispute, which includes a feud over Huawei Technologies Co has fanned fears it could threaten global growth.

“The trade relations between China and the United States are difficult, they are contributing to the slowdown of the global economy,” European Commission President Jean-Claude Juncker said on Friday, the summit’s first day.

The US president has said he would extend existing tariffs to cover almost all imports from China into the United States if the meeting brought no progress on wide-ranging US demands for economic reforms.

At the start of Saturday’s talks, Xi told Trump he was ready to exchange views on fundamental issues and stressed the need for dialogue rather than confrontation.

“Cooperation and dialogue are better than friction and confrontation,” he said.

The G20 leaders will agree on Saturday to accelerate reforms of the World Trade Organization, but stop short of calling for the need to resist protectionism in their closing communique, Japan’s Nikkei newspaper said.

The United States says China has been stealing US intellectual property for years, forces US firms to share trade secrets as a condition for doing business in China, and subsidises state-owned firms to dominate industries.

China has said the US is making unreasonable demands and must also make concessions.

The dispute escalated when talks collapsed in May after Washington accused Beijing of reneging on reform pledges.

Trump raised tariffs to 25 percent from 10 percent on US$200 billion (RM826.6 billion) of Chinese goods, and Beijing retaliated with levies on US imports.

As ties have soured, the dispute has spread beyond trade. The US administration has declared Chinese telecoms giant Huawei a security threat, effectively banning US companies from doing business with it.

US officials have also pressed other governments to drop Huawei from plans to develop fifth generation, or 5G, networks.

Trump has suggested easing US restrictions on Huawei could be a factor in a trade deal with Xi.

China has demanded the US drop the curbs, saying Huawei presents no security threat.