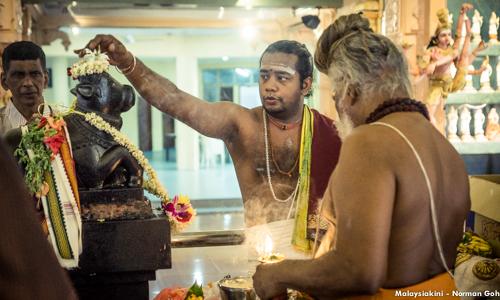 Hindu ash on my Catholic forehead

COMMENT | It was 1963 and I was a mere six-year-old. There I was, with three of my siblings, having the run of the place outside our estate bungalow in Gomali Estate, near Segamat.

We were playing 'police and thief' with our Hindu neighbours' children, when an itinerant holy man or sadhu, clad in a saffron dhoti, meekly strolled into our game.

He had a silver tray with him, which hosted the figurine of a Hindu deity, some holy ash (vibuthi or thinoor in Tamil) and fresh petals of jasmine.

The Hindu children ran to him as if he was Santa Claus, but my three siblings and I watched as he blessed our playmates with vibuthi on their foreheads.

As the sadhu looked in our direction invitingly, our friends urged us to receive the ash, but we were reluctant until someone cajoled, “Receive the ash. Ghosts will not disturb you if you have it on your forehead.”

That was all we needed (the ghost part) to be encouraged to receive the sadhu’s ash, much to his delight. As he turned to go, we dashed into our courtyard for a drink of water...