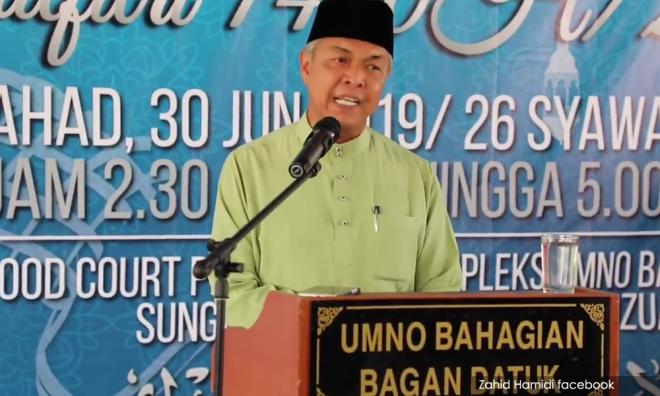 Ahmad Zahid Hamidi has announced his return from garden leave to resume the mantle of Umno president.

Zahid made the announcement in conjunction with the first anniversary of him being elected as party president and not "appointed by Umno" leadership.

"So the one year is significant and important to me, hence on June 30, 2019, I wish to announce that I am ending my (garden) leave today.

“This means, beginning today, I will resume my role as Umno president,” he said during a Hari Raya event in Perak.

Zahid went on leave in December last year amid pressure for him to step aside.

His opponents from within Umno had criticised him for what they claimed was a lack of direction.

Zahid also presided over an exodus of lawmakers from the party, with threats of further defection if he did not step down.

He finally relented, and on Dec 18 announced that his deputy Mohamad Hasan (left in photo) would take over as the new acting president.

Just hours ago, former Umno Youth chief Khairy Jamaluddin – a close ally of Mohamad – had said Zahid should first seek the opinion of the Umno supreme council before announcing his return.

"To say that it is solely Zahid's decision, I would disagree.

"In the last few months, including the three by-election wins we achieved, they were all done under Tok Mat (Mohamad)," he said after officiating the Sungai Buloh Umno divisional meeting in Shah Alam today.

Yesterday, former Umno president Najib Abdul Razak had said it was up to Zahid to decide whether he should make a comeback.

Both Najib and Zahid are facing graft charges.

Under Mohamad, a proposal was made to expel Umno members convicted of graft and who have exhausted all appeals.

However, the proposal was shot down with strong objection from the likes of Umno supreme council member Lokman Noor Adam, a Najib loyalist.

"Zahid's announcement to end his leave is a good move, in line with the mandate given to him as president. As a leader and party member, we should respect it.

"Sabah Umno is confident that the party's mission and mobilisation will be intensified with this decision. Let us strengthen the party together," he said in a statement.